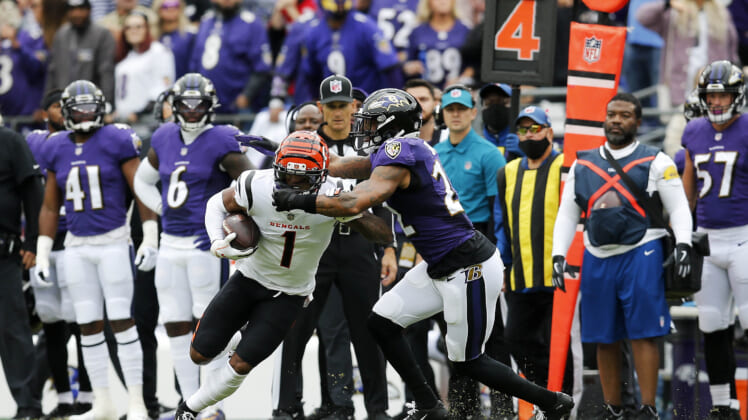 No other rookie in the NFL is making a bigger impact in his first season than Cincinnati Bengals’ wide receiver Ja’Marr Chase. By far the leading candidate to win Offensive Rookie of the Year, Chase has been tough to stop for any opponent this season.

The Baltimore Ravens got a taste of just how incredible the former LSU star is, during Sunday’s matchup with the Bengals receiver.

Halfway through the third quarter with the Bengals leading 20-17, Bengals quarterback and former Tiger teammate Joe Burrow found Chase on a quick strike across the middle of the field on 3rd-and-2. Chase caught the pass and quickly discarded three Ravens defenders as he sprinted the rest of the way for an 82-yard touchdown reception.

Chase already came into this Week 7 matchup fourth in the NFL among pass-catchers with 553 receiving yards and five touchdowns. This latest play will only add to his lore. Chase now has more receiving yards in a player’s first seven games than any other receiver in NFL history.