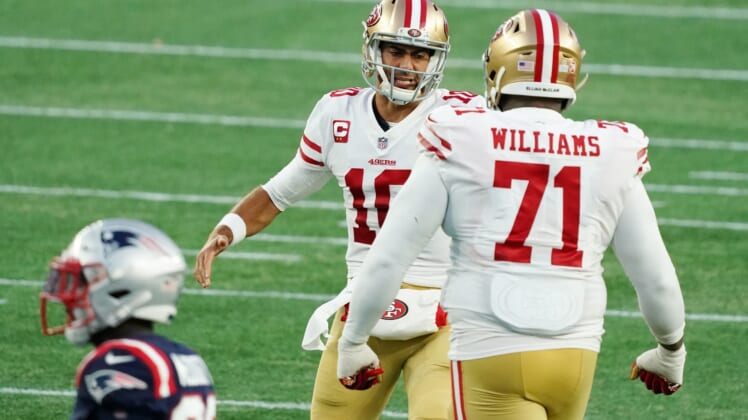 The New England Patriots had been linked all offseason to a potential Jimmy Garoppolo trade. That changed a bit late last week when New England re-signed fellow quarterback Cam Newton.

At that point, it seemed to be a foregone conclusion that Newton would be the Patriots’ Week 1 starter with some potential competition coming via the NFL free agent market.

This is until we got details regarding Newton’s contract. It’s pretty much a one-year, $5.1 million contract. That’s backup money. It also suggests something could still be in play regarding New England and the San Francisco 49ers’ current starting quarterback.

“Jimmy Garoppolo is still out there. I’ve spoken to enough people around the league who said it just makes too much sense for them to at least try to reunite. I was told by a source that the 49ers have not been overly eager to trade Garoppolo yet,” ESPN’s Jeremy Fowler noted on Sunday (h/t Bleacher Report). “There hasn’t been much traction there yet, but maybe the Patriots can change their mind.”

As the lads say, it takes two to tango. Despite some pretty strong NFL rumors to the contrary, San Francisco’s brass has not shown a willingness to move off Garoppolo in a trade.

That could be general manager John Lynch and Co. playing it close to the vest as the Deshaun Watson situation moves forward. Previous reports were that the 49ers would only trade Garoppolo if they were to land Watson from the Houston Texans. Under that scenario, pulling off a Jimmy Garoppolo trade on the cheap could make sense.

As for the Patriots, it’s no surprise that they are still being linked to Garoppolo after retaining Newton. Head coach Bill Belichick was among those in the organization who did not want to move Jimmy GQ to the 49ers during the 2017 season. He envisioned the now 29-year-old quarterback as the heir-apparent to Tom Brady. Now just over a year removed from leading San Francisco to the Super Bowl, a reunion could end up being in the cards.

How might a Jimmy Garoppolo trade to the New England Patriots look?

If San Francisco were to trade for Watson or even New York Jets quarterback Sam Darnold, it would look to trade Garoppolo. Said move would likely cost an acquiring team a mere mid-round pick.

A potential Garoppolo trade to New England could include the Pats trading their fourth-round pick in 2021 and high-priced cornerback Stephon Gilmore to San Francisco. He’s been bandied about in trade talks. Said move would help offset Garoppolo’s $23-plus million cap hit in 2021.

It’s also important to note that New England would demand Garoppolo restructure his contract. No team outside of San Francisco is going to pay him that cap hit. Heck, it’s one of the reasons rumors have suggested that the former second-round pick could be moved.

If something were to happen on this front, it would likely come simultaneously with the 49ers pulling off a move for Garoppolo’s replacement.

Click below for more New England Patriots news and rumors heading into the start of NFL free agency.