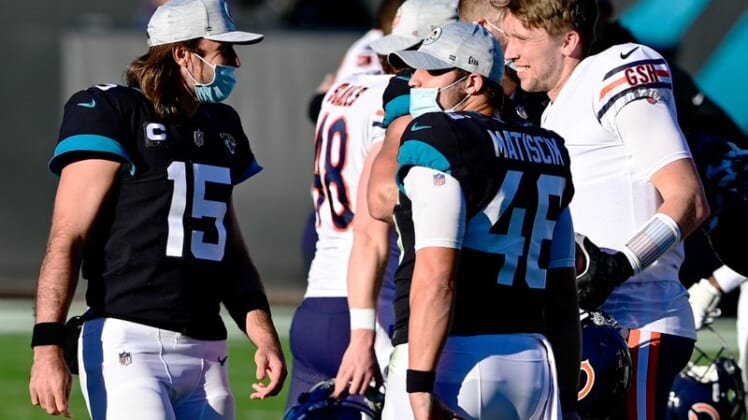 It does not seem like too long ago that Minshew Mania was all the craze in Duval. Almost immediately after the Jacksonville Jaguars selected Gardner Minshew in the sixth round of the 2019 NFL Draft, he became a fan favorite in Florida.

A star with Washington State, Minshew jumped on to the scene as a rookie by compiling 21 touchdowns against six interceptions in 12 starts.

It led to Jacksonville trading high-priced free-agent signing Nick Foles after one season, leading to the likelihood that Minshew would be seen as the team’s franchise quarterback.

Fast forward a calendar year, and new Jaguars head coach Urban Meyer is slated to select Clemson quarterback Trevor Lawrence No. 1 overall in the 2021 NFL Draft. What does that mean for Gardner Minshew in Duval? Well, he could be headed to another NFL city in a trade here soon.

“One QB to monitor: The Jaguars have received a few calls from teams inquiring about QB Gardner Minshew, source said. The Jax QB room is in flux, and we’ll see where this one goes,” NFL Media’s Ian Rapoport reported Wednesday afternoon.

It’s no surprise that teams would be interested in acquiring Minshew. Despite some injury issues last season, the 24-year-old quarterback was still able to throw 16 touchdowns against five interceptions in eight starts. He did that playing for a Jaguars team that lost its final 15 games and was lacking talent clear across the board.

What teams might have interest in a Gardner Minshew trade?

Set to earn a combined base salary of less than $1.9 million over the final two years of his rookie contract, there’s no shortage of teams who might be interested in Minshew. Even those with elite-level starters could take a chance on him as a cheap QB2 option.

However, it makes more sense to focus on teams that could actually allow Minshew to compete for a starting quarterback job. He’s more than proven his worth over the first two seasons of his career.

These are just three of a number of options should the Jaguars pull off a Gardner Minshew trade. He will have interest and could even potentially compete for a starting job with another team during training camp. At the very least, it’s something to keep an eye on.