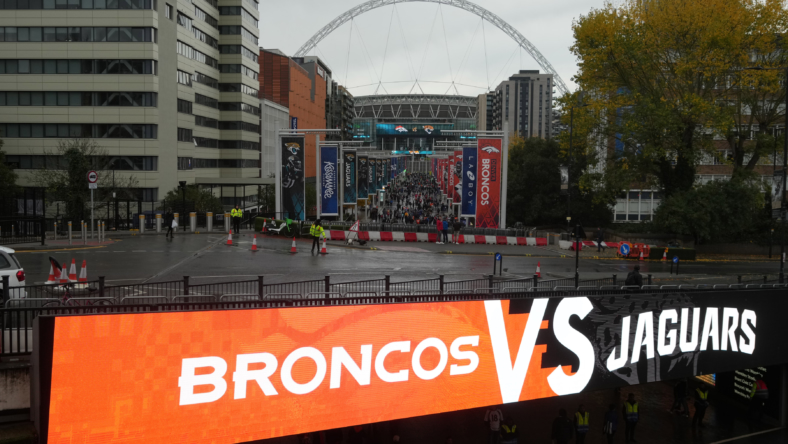 While many may not have had a chance to watch the Denver Broncos take on the Jacksonville Jaguars in the early AM time slot on Sunday morning in Week 8, plenty of spectators are on hand, in person, to take in the action.

According to the ESPN+ broadcast, 86,215 people were at Wembley Stadium for the last London matchup of the year. This is a new record for the largest crowd in NFL International Series history.

The previous mark of 85,570 spectators was set in 2018 when the Philadelphia Eagles took on the Jacksonville Jaguars, also at Wembley Stadium.

Despite legendary franchises also paying a visit to London earlier this season, Jacksonville continues to draw big crowds, despite having a losing record.

The two previous matchups in London featured the Minnesota Vikings vs. New Orleans Saints on Oct. 2 and the New York Giants vs. Green Bay Packers on Oct. 9, which was the first time two teams with a winning record faced off in London.

Amazingly, even though the Broncos vs. Jaguars battle would have been largely overlooked stateside, it’s a massive draw in London, continuing to prove just how thirsty fans around the world are for live NFL football.

NFL heads to Germany, then Mexico next

After three games in London, the NFL has to be thrilled with the response. The two previous games each brought in over 60,000 spectators apiece at Tottenham Hotspur Stadium, and while Wembley may have beaten both efforts, the league can expect big attendance numbers as the NFL International Series continues.

In Week 10, the NFL heads to Munich, Germany, when Geno Smith and the Seattle Seahawks take on Tom Brady and the Tampa Bay Buccaneers. That game will take place at Allianz Arena.

Then, in Week 11, the NFL returns to Mexico when the San Francisco 49ers battle the Arizona Cardinals at Estadio Azteca.