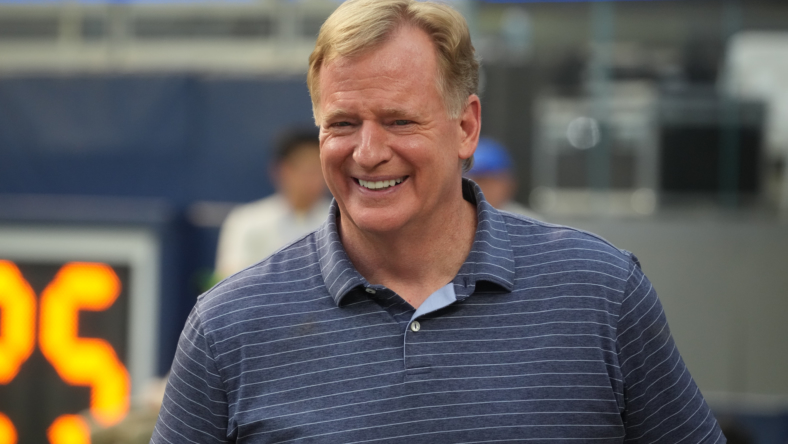 Week 4 kicked off the NFL International Series at Tottenham Hotspur Stadium in London, and the UK is set to host another this Sunday before closing out this year’s series in Week 8 at Wembley Stadium. We’ll also get a Week 10 game in Germany and a Week 11 game in Mexico. NFL commissioner Roger Goodell has placed a strong emphasis on continuing to grow the sport in all areas of the world, and these latest matchups are the latest example.

Despite the NFL not having a franchise located anywhere other than the United States, the NFL International Series has been a success, with over 60,000 on hand to take in Week 4’s last-second finish between the Minnesota Vikings and New Orleans Saints. It’s clear that fans overseas are just as excited as the football community stateside, which only fuels bigger and broader ideas.

The current system presents its own challenges, such as the lengthy travel time required and some extra scheduling quirks. Even the game time itself, starting at 9:30 AM ET, is a bit quirky, but it’s working. Another challenge involves one of each of the two teams sacrificing one of their home games, only to have to travel and play in front of what’s likely a neutral crowd, at best. It’s not exactly what any team wants to do, as home-field advantage can be a big factor on game day, especially in specific stadiums where the fans make their voices heard.

While some of these challenges will never be able to be avoided altogether, the league can do a few things to make the process much smoother.

One of the better ideas to not only make the International Series more frequent but continue to grow the game, all while making the games make more sense for everyone, is to add a European-based division. On Saturday, Goodell brought that dream closer to reality, stating his belief that London could “support two franchises.” But he went a step further, noting a desire to try and uncover a few different host cities for future NFL franchises, likely as a form of expansion.

That’s a big statement. But it makes a lot of sense. With Europe getting its own division, it would add more games to the schedule, essentially making the 9:30 AM football window permanent. Yet would instead feature teams that don’t have to drastically alter their normal regimen. Best of all, more football.

Several locations could make sense to land an NFL franchise

Having a team that plays their games at the Tottenham Hotspur Stadium and another that plays at Wembley Stadium make sense, as they’ve already proven to be hotspots that can draw enough fanfare to support a franchise.

Of course, there are other markets that could make sense, too, such as planting a team in Canada, perhaps in Toronto. It’s a bit curious that all other major sports leagues have at least one team based in Canada, but not the NFL. Sure, they have their own football league with the Canadian Football League, but the rules are a bit different, and it’s not a direct fit.

Another obvious choice would be expanding into Mexico. Estadio Azteca would be a fantastic site for an NFL franchise. They’ve already hosted three games and are set to host another in November. Located in Mexico City, Estadio Azteca has brought in north of 76,000 fans each time and also has a unique feature in that the stadium sits 2,200 feet above sea level, allowing kicks to sail a bit further, almost like we see at Empower Field at Mile High Stadium in Denver.

Then there’s always Germany, as Munich is set to host its first NFL game of the International Series in November as well. All locations listed above would make sense but in the same division? Maybe not. These are just some of the hurdles commissioner Goodell will have to sift through to keep expanding the NFL.

It should be noted there’s been no indication of whether adding a division would mean relocation of a couple of existing franchises or whether it would require adding brand new expansion franchises, but chances are, it would be the latter as the sport only continues to generate more revenue. Either way, it may not be long before the football world is blessed with all-day football on Sundays, just like we saw in Week 4 and just like we’ll get to enjoy again in Week 5.

Related: NFL picks against the spread: Seahawks and Lions are live underdogs in Week 5