Eight teams most impacted by the Alex Smith trade

The Kansas City Chiefs and Washington Redskins pulled off a blockbuster trade Tuesday night that will have wide-ranging ramifications around the NFL. By virtue of Pro Bowl quarterback Alex Smith heading to Washington, the entire dynamic of the NFL offseason changes on a dime.

What does this mean for Kirk Cousins and his future NFL destination? How will the top of the 2018 NFL Draft be impacted? Will the bevy of teams that missed out on Smith now turn their attention to lesser options or go after Cousins in a big way? What does Smith’s massive extension with the Redskins mean for quarterbacks looking for raises moving forward?

These are a ton of questions, and most won’t be answered for a while. But here, we’re going to focus on the eight teams outside of Kansas City and Washington that were most impacted by the Alex Smith trade. 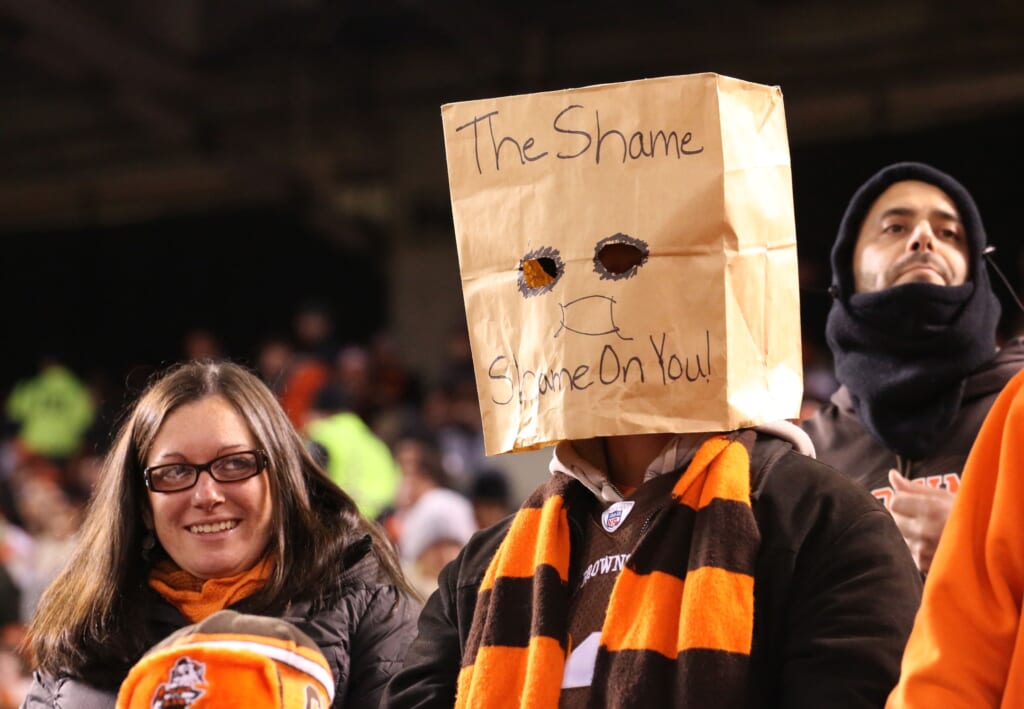 Cleveland reportedly offered up one of its three second-round picks in the 2018 NFL Draft for Smith. Rather than take that deal, the Chiefs added a young corner Kendall Fuller while settling for a third-round pick from Washington. It’s not yet known whether Cleveland offered up a player in addition to that pick. But one thing is readily apparent here. The Browns continue to fail miserably in their attempt to add a viable quarterback to a team that’s 1-31 in its past 32 games.

This comes on the heels of Cleveland missing out on both A.J. McCarron and Jimmy Garoppolo over the past calendar year. New GM John Dorsey and Co. will now likely turn their attention to adding Kirk Cousins — something that the Pro Bowler isn’t necessarily against. And with north of $110 million in cap room, Cleveland can likely make the best offer for Cousins. Then again, the quarterback has made it clear that money isn’t going to be his primary motivation in free agency. Look for Cleveland to still add a veteran to go with a rookie within the top five of this year’s draft. Whether said veteran is of a higher profile remains to be seen.

Denver seems to be the optimal fit for Cousins. The team was said to be in on the Smith sweepstakes, but it made very little sense for Kansas City to trade him to a division rival. Instead, Cousins can act as that quarterback of the future while helping GM John Elway avoid another first-round mistake at quarterback after the entire Paxton Lynch fiasco. It’s something former Super Bowl MVP Von Miller is in support of.

The issue here is that Denver is in the middle of the pack when it comes to cap room. The team surely can move on from some dead weight such as Aqib Talib, but fitting Cousins into the cap will take a lot of work. Instead, we’re now looking at the possibility the Broncos will look for a lesser option to upgrade their quarterback situation. The trio of impending free agents in Minnesota, Sam Bradford included, could make some sense here. Though, with the fifth overall pick in April’s draft, the Broncos have been linked to reigning Heisman winner Baker Mayfield. The Smith trade could turn things in that direction even more. 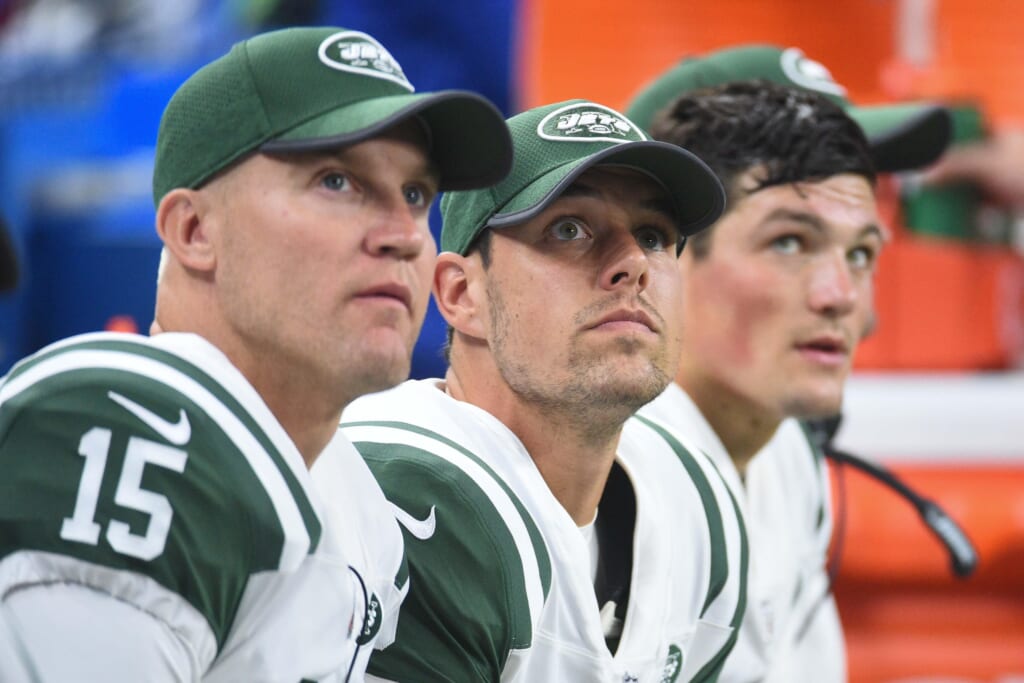 Much like a vast majority of the teams in this article, New York will surely kick the tires on Cousins. But that seems to be a long shot at this point. The team currently has nearly $80 million in cap room. In no way does that mean Cousins himself will decide that joining a reclamation project in New Jersey makes sense.

It’s also important to note here that the team might very well decide to bring back a veteran in Josh McCown who surprised the masses last season. McCown could act as a stopgap option as the Jets look to mold a young quarterback with the sixth pick in April’s draft. Ways away from contention, that seems to make more sense than exhausting a huge capital on Cousins when he’s going to be in the latter stages of his prime once the Jets are actually contenders again.

Fresh off Carson Palmer’s retirement, Arizona was certainly in the mix for Smith. It just couldn’t make a deal work, especially with Kansas City picking up a mid-round pick and an up-and-coming player for the veteran. So new head coach Steve Wilks and Co. are right back at square one. The internal options of Blaine Gabbert, Drew Stanton and Matt Barkley are not the answers here. Arizona knows that.

It’s a tricky situation for a Cardinals team that hopes to be in contention for a playoff spot next season. Picking 15th overall, Arizona isn’t going to be in position to land one of the top-end quarterbacks in the draft short of it deciding to move up. Based on the team’s interest in Smith, it seems realistic to believe Arizona will now look at another stopgap option without delving too much into its cap or draft assets. That’s where the likes of Sam Bradford and even someone like Jay Cutler could be an option. The idea here would be to get that one or two-year starter while drafting an eventual replacement in either the first or second round. 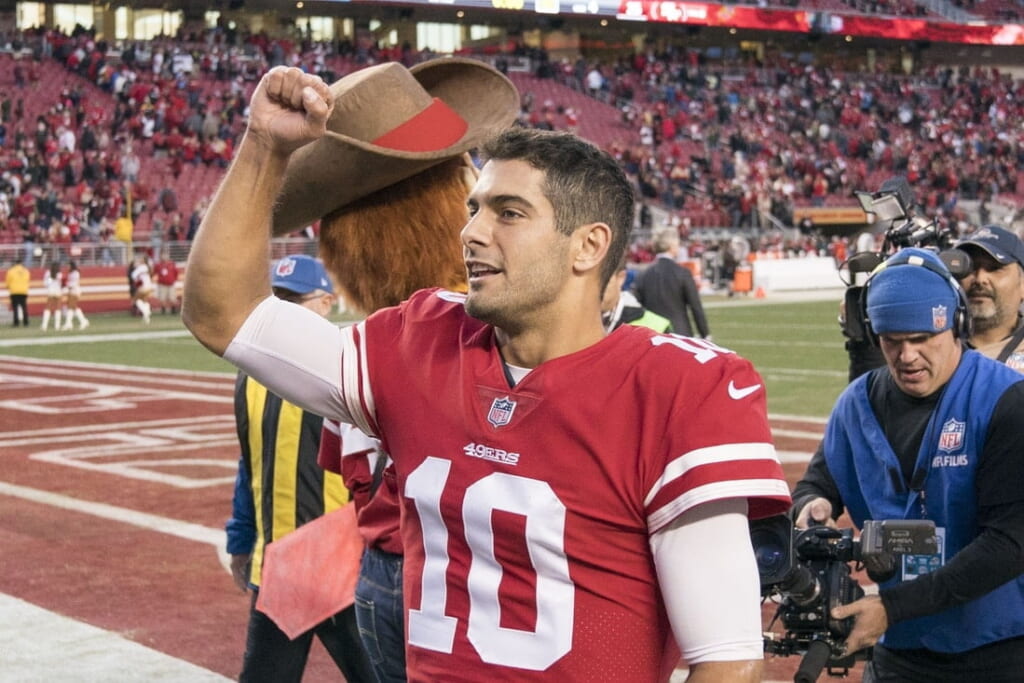 Smith’s new contract with Washington impacts his former team in a big way. The extension calls for $94 million over four seasons with an average salary of $23.5 million. Talk about resetting the quarterback market before free agency has even started. And it’s definitely going to play a role on contract extension negotiations with stud young quarterback Jimmy Garoppolo.

The 49ers remain confident that they can get a long-term deal hashed out with Garoppolo before having to eventually place the franchise tag on him in March. Whether Smith’s deal changes this remains to be seen. But we now have a baseline for what to expect in negotiations. Garoppolo will now ask for more than the $23.5 million Smith received annually. He’ll also likely demand north of the $71 million guaranteed that Smith got from the Skins. No matter how successful Garoppolo has been in limited action, that’s a whole lot of cash to throw in the direction of a quarterback with seven career NFL starts under his belt.

We doubt that the Vikings were going hard after Smith in the lead up to his trade. It also seems highly unlikely that GM Rick Spielman and the Vikes are going to dole out upwards of $30 million annually for a quarterback when the team is built to win with an average signal caller under center. The issue here is that Smith’s contract might have very well set the market for what Case Keenum and/or Sam Bradford will ask for in free agency.

Minnesota already seems a tad hesitant to pay out a huge sum of cash to Keenum after just one solid season as a starter in the NFL. If his asking price is now north of $20 million annually based on Smith’s contract, the Vikings will likely look in another direction. And with Smith now off the market, the focus of other teams will turn to these secondary options. If that’s the case, look for free agency to be kind to both Keenum and Bradford. That could impact Minnesota’s quarterback situation moving forward. 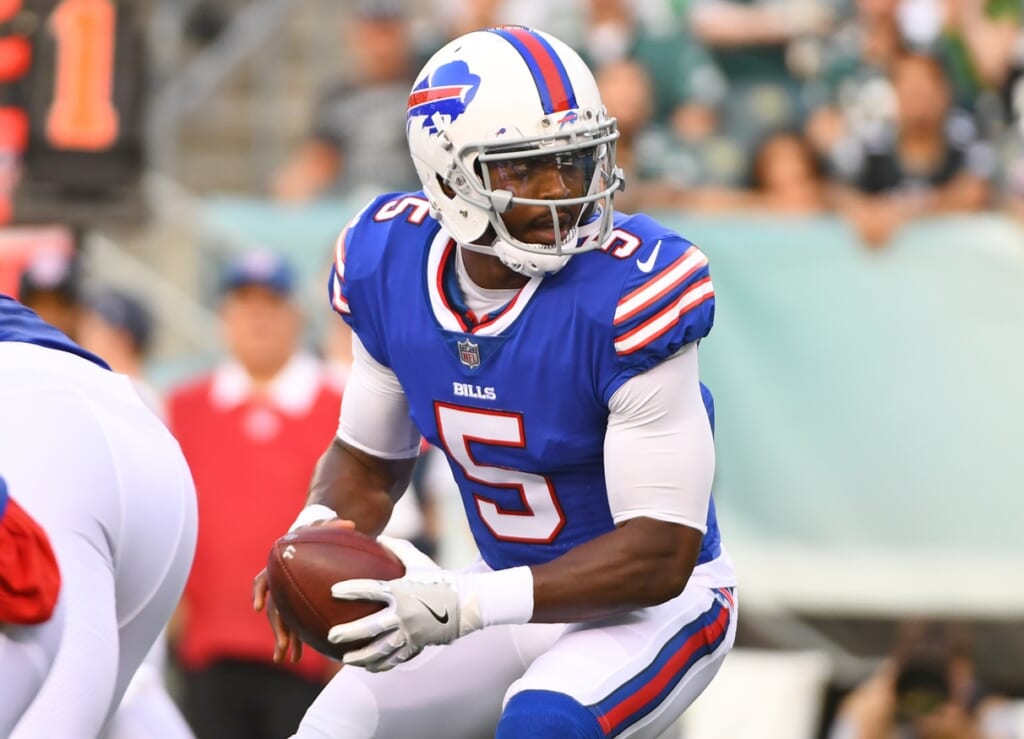 Buffalo has been among the teams most linked to Kirk Cousins. It makes sense. This squad earned a playoff spot for the first time since 1999 despite less-than-stellar play from the quarterback position. It is clearly moving on from Tyrod Taylor. That makes the Bills big-time players for pretty much any starter-caliber quarterback on either the free agent or trade market.

GM Brandon Beane and Co. surely kicked the tires on adding Smith to the mix. Why not? With multiple picks in both the first and second rounds of this year’s draft, Buffalo could have made a play for Smith and still have boasted enough assets to move up for one of the elite signal callers in the draft. The team now has a major decision to make here. Does it exhaust the financial capital to bring in Cousins or the draft capital to move up for one of the top-tier quarterbacks in the draft?

Apparently, Alex Smith and Aaron Rodgers are going to continue being conjoined at the hip. The top-two quarterbacks drafted back in 2005, these two have seen their careers take different paths. But now, it’s pretty clear that Smith’s new contract will set the market for a potential Aaron Rodgers extension.

Green Bay has made it more than clear that signing Aaron Rodgers beyond the 2019 season is a top priority this spring. Set to make just $19.8 million in base salary next season, Rodgers is now likely going to demand they expedite this process. There’s no reason why he should be paid nearly $5 million less per season than Smith. That makes absolutely no sense. Look for something to hit here at some point soon, guaranteeing that Rodgers goes from underpaid quarterback to the highest-paid player in the NFL. Smith’s new contract with Washington pretty much makes this inevitable.