The Philadelphia Eagles went into the 2021 NFL season hoping quarterback Jalen Hurts would establish himself as their long-term starter, all while acknowledging he might also not be the guy to lead this franchise into the future. After 12 starts, it seems the organization is no closer to having a definitive answer.

Things looked promising before Week 12. Reports emerged that confidence was building with an increasing possibility that he enters 2022 as the unquestioned starter. But this franchise was reminded in its very next game why the looming decision won’t be easy.

Hurts completed a season-worst 45% of his pass attempts in a 13-7 loss to the New York Giants, throwing three interceptions and finishing with one of the worst passer ratings (17.5) in the NFL this season. Nick Sirianni later revealed that his second-year quarterback suffered an ankle injury, which puts his availability for Week 13 uncertain. 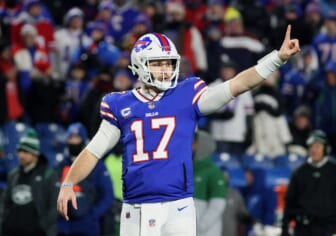 The latest performance, paired with his potential absence for an upcoming game, accelerates a ticking clock even faster. Eagles’ insider Jeff McLane wrote about the dynamic Friday, reporting that Hurts’ grace period is nearing its end and that the front office still doesn’t have a definitive feeling about their quarterback.

According to The Philadelphia Inqurier‘s Jeff McLane, Eagles’ owner Jeffrey Lurie still believes Hurts can be the starting quarterback in 2022 and potentially beyond. But general manager Howie Roseman isn’t as convinced, with his assessment resulting in lesser confidence that Hurts can be the guy moving forward.

This wouldn’t be the first time there is a reported split on the starting quarterback. Reports surfaced in early March that Lurie wanted Hurts to start and no quarterback competition for the job. It wasn’t a sentiment shared by the entire organization, with some members of the Eagles’ organization uncertain about the young quarterback getting the reigns. 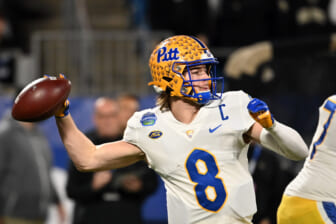 Will Jalen Hurts start for the Eagles in 2022?

Philadelphia finds itself in a tricky situation. Holding three first-round picks in the 2022 NFL Draft, giving Roseman more than enough assets to trade up for a franchise-caliber quarterback prospect. But no signal-caller in this year’s draft class is viewed as a generational talent or even a surefire top-10 pick.

The No. 53 overall pick in the 2020 NFL Draft, a selection made by Roseman and Lurie, Hurts’ rookie contract would allow Philadelphia to spend a majority of its money on its defense and a skill group that helps Hurts thrive. But if he can’t be depended upon in big games, especially when his team needs him to throw a lot, that either puts the Eagles behind the competition or forces them to explore alternatives.

As a whole, Hurts’ passing stats (60.1% completion rate, 13-8 TD-INT ratio and 83.9 passer rating) don’t meet the standards for a franchise quarterback. But his unique athleticism and the leadership that results in players rallying around him are rare traits.

There is still a little time for things to get figured out. The Eagles have a bye in Week 14 and then return for a crucial stretch against the Washington Football Team (twice), New York Giants and Dallas Cowboys. If Hurts performs well and this team records at least two wins, he will likely be the favorite to start in 2022.

But if the woes continue and this offense’s inconsistency results in an ugly stretch to end the year, the Eagles will likely be in the quarterback market next offseason.