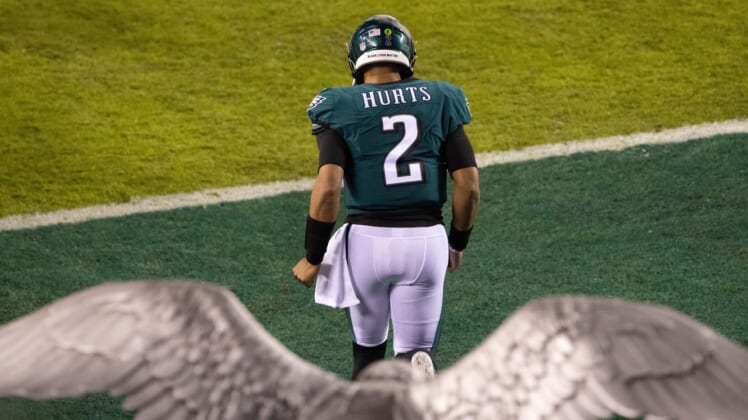 Philadelphia Eagles owner Jeffrey Lurie fell in love with Carson Wentz, trading up to draft him with the No. 2 pick in the 2016 NFL Draft and later signing him to a huge contract. Five years later, one of the NFL’s most involved team owners seems prepared to make another questionable commitment to a quarterback.

When Wentz struggled mightily through the 2020 season, the Eagles eventually pulled the plug and gave Jalen Hurts an opportunity to prove himself. The 2020 second-round pick created some excitement in his first NFL start, stunning the New Orleans Saints in a 24-21 victory.

While things went off the rails for the rookie in his final three games, the Eagles saw enough. They traded Wentz, after hiring a new coaching staff, to the Indianapolis Colts. Once the move went down, many assumed Hurts would compete for the starting job in 2021 and might face competition from a top pick in the 2021 NFL Draft.

It seems Lurie is ready to rule that out entirely based on the latest NFL rumor.

ESPN’s Chris Mortensen said during a recent ESPN appearance (H/T Bleeding Green Nation) that Hurts is Lurie’s guy. The Eagles’ owner has made it clear to the coaching staff and general manager Howie Roseman that he wants everything possible done to help Hurts be successful in 2021, rather than adding someone to seriously compete with him in training camp.

When asked for further clarification, Mortensen tweeted that Lurie instructed his staff to prioritize Hurts’ success and he doesn’t want there to be a true competition for the starting quarterback job.

From multiple standpoints, this should be concerning to fans. While Roseman has come under plenty of fire in Philadelphia, an owner becoming so involved in football operations rarely works out. Jerry Jones is one of the rare exceptions of an owner being involved in the draft and 53-man roster, but even that has produced little success as of late. Another example, the Washington Football Team has been a disaster under Daniel Snyder and he has a history of dictating decisions with top picks.

There’s another problem for the Eagles. By this going public, there is less incentive for a team to trade up. If the Eagles are rebuilding around Hurts, the logical decision would be trading down with a quarterback-needy team and gaining more assets to help put the 22-year-old passer in a better position to thrive.

If teams like the San Francisco 49ers and Carolina Panthers feel like Philadelphia isn’t a threat to draft a quarterback, the Eagles have even less leverage in trade negotiations.

It’s not like Hurts impressed in his final three starts, when opposing teams had more film to watch. From Week14-16, he completed just 50.49% of his passes, took 10 sacks, posted an ugly 4/3 TD/INT ratio and had a 75.4 passer rating. Ultimately, he was benched in favor of Nate Sudfeld in Week 17.

The Eagles might have a legitimate shot at Ohio State star Justin Fields with the No. 6 selection. At the very least, a high-upside quarterback like Trey Lance will be available. Instead, Lurie believes he knows what is best for the football team and there’s a strong chance it backfires.