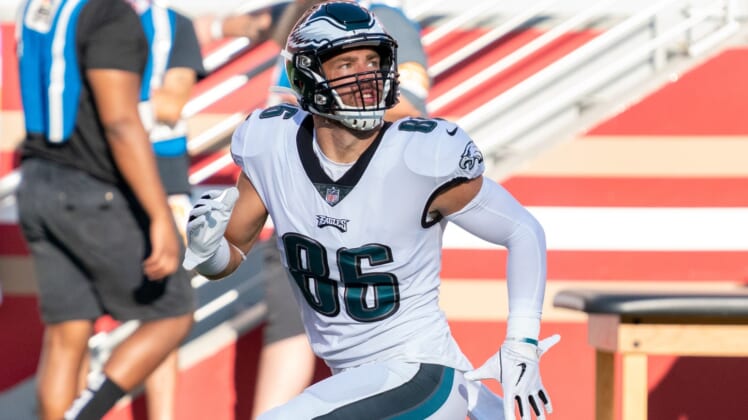 The Philadelphia Eagles have been in contact with other teams regarding a potential Zach Ertz trade over the past few weeks. It makes sense for the Eagles to trade the three-time Pro Bowl tight end given his contract and lack of production a season ago.

With that said, it’s an open question how much Philadelphia might be able to acquire for the 30-year-old Ertz. In fact, some believe that he could be released outright.

Not so fast. Apparently, there’s a strong market for Ertz. Something could also happen here in the not-so-distant future.

“Multiple teams have called the Eagles about the possibility of trading for three-time Pro Bowl TE Zach Ertz, and a deal could happen in the coming days, according to two sources familiar with the talks,” NFL Media’s Mike Silver reported Sunday evening.

Among the teams that had reported interest in Ertz, both the New England Patriots and Seattle Seahawks could make sense. Still attempting to replace all-time great Rob Gronkowski, Patriots tight ends recorded a combined 18 receptions a season ago. Meanwhile, the Seahawks are looking for a new veteran tight end following the retirement of Greg Olsen.

A second-round pick out of Stanford back in 2013, Ertz earned Pro Bowl appearances each season from 2017-19. He recorded an average of 93 receptions for nearly 1,000 yards during that span. However, the veteran has seen a downtick in production recently. This past season, Ertz recorded just 36 catches for 335 yards and a touchdown.

How might a Zach Ertz trade from the Philadelphia Eagles look?

Currently playing under a five-year, $42.5 million contract, Ertz would cost $8.25 million against the cap for any team attempting to acquire him. Obviously, the veteran tight end would have to work out a contract restructure.

What we do now is that Philadelphia is unlikely to receive anything more than a mid-round pick for the veteran tight end. Of those with the most room to spend under the projected 2021 NFL salary cap, the above-mentioned Patriots are joined by the New York Jets and Carolina Panthers as logical potential landing spots.

As for the Philadelphia Eagles, this is all about cap savings. They already have an in-house candidate in former second-round pick Dallas Goedert to take more snaps at tight end next season. The former South Dakota State star recorded 104 receptions for 1,131 yards over the past two seasons.