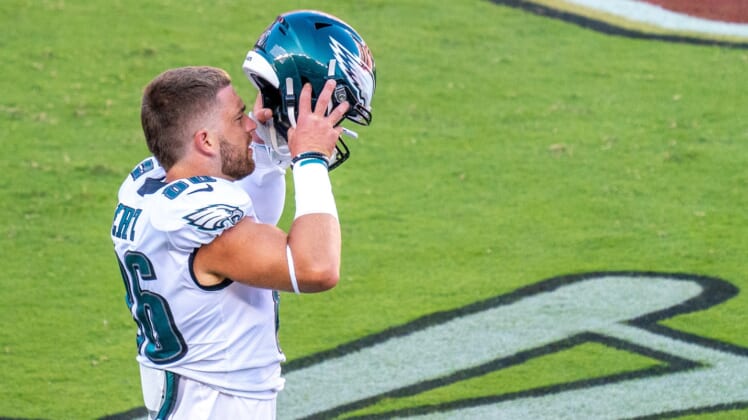 The Philadelphia Eagles have already fired Doug Pederson and traded Carson Wentz. Now, another huge change to the offense might be around the corner. In a complete overhaul of the offense this spring, Zach Ertz could be the next to leave Philadelphia.

Coming off a miserable 2020 season, the Eagles seem to be hitting the reset button. Jalen Hurts is expected to take over as the team’s starting quarterback next season, replacing a franchise star who the fan base once loved. Meanwhile, Ertz could soon be headed for the same fate thanks to the emergence of Dallas Goedert.

With the writing on the wall in Philadelphia, NFL teams are reportedly not wasting any time trying to take advantage.

According to Eagles Maven’s Conor Myles, multiple teams have reached out to the Eagles about a trade for Zach Ertz. Among them the Los Angeles Chargers and Los Angeles Rams both called to gauge the price on the Pro Bowl tight end. They join the Seattle Seahawks and Indianapolis Colts, who reportedly engaged in discussions with Philadelphia earlier this month.

Ertz, the team’s second-round pick in the 2013 NFL Draft, has plenty of reason to be frustrated with the current situation. After the Eagles exercised their club option last year, the veteran tight end was hopeful it would lead to a contract extension. Both sides tried negotiating during the summer, but talks went south. By the midway point of the 2020 season, Ertz was put on the trade block.

The 30-year-old also likely wasn’t happy with his diminished role in the offense. Ertz finished with a career-low 335 receiving yards and one touchdown, averaging just 9.3 yards per receptions. While injuries played a role in his struggles, appearing in just 11 games, he also only caught 50% of passes thrown in his direction.

He carries a $12.4 million cap hit next season, money the Eagles would love to get out from. Furthermore, Goedert’s emergence gives the offense a go-to tight end who can step into a featured role in this passing attack.

Even if years of injuries have started to take away some of his athleticism, Zach Ertz can still be a No. 1 tight end for an offense. He is a capable receiving threat, just over a year removed from a ranking as one of PFF’s best tight ends.

If the Philadelphia Eagles are unable to trade Wentz in the coming weeks, per Myles, he will then seek a release. At that point, the team loses him for nothing and their former star can look for the best opportunity to prove his team was wrong.