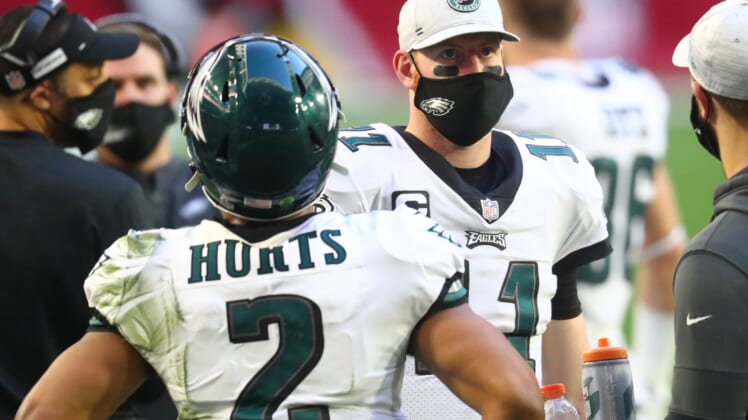 The Philadelphia Eagles decision to pull off a Carson Wentz trade on Thursday ends a drawn-out process of finding a taker for the struggling quarterback.

In the end, Philadelphia received a third-round pick in the 2021 NFL Draft and a conditional 2022 second-round pick for the enigmatic signal caller.

This seems to be a suggestion that young quarterback Jalen Hurts will take over as the Eagles’ starter in 2021 after he replaced a benched Carson Wentz as a rookie last season. Not so fast.

“The Eagles are likely to turn to Jalen Hurts, though they also intend to bring in competition for him. The Eagles’ starting job is not expected to automatically go to Hurts,” ESPN’s Adam Schefter and Chris Mortensen reported on Thursday.

Philadelphia received a lot of flack last April for selecting Hurts in the second round of the 2020 NFL Draft. In retrospect, it appears that general manager Howie Roseman and Co. knew what they were doing following Wentz’s massive struggles this past season. He tied for the league lead in interceptions with 15 despite being benched 12 games in.

Even then, reports indicating that Hurts is not guaranteed the starting job are rather interesting. Philadelphia took a $33.8 million dead cap hit by trading Wentz.

It is well over the cap without a ton of options to improve the situation ahead of the start of NFL free agency in less than a month. This is a clear indication that options will be limited for Philadelphia in attempting to find competition for Jalen Hurts.

A report surfaced earlier this week that the Eagles might very well decide to exhaust the sixth pick in the 2021 NFL Draft on a quarterback.

North Dakota State’s Trey Lance is among those who could be available. With that said, it appears to be nothing more than smoke and mirrors. It’s more than likely that said report was put out there leading up to the Carson Wentz trade in order to gauge interest with quarterback-needy teams in trade-up scenarios.

None of this means that Philadelphia won’t kick the tires on veteran options. Pending free agent Nate Sudfeld seems to be a favorite of the Eagles’ brass. Perhaps, he’s brought back to compete with Hurts.

As for the NFL free agent market, the Eagles will have to be fiscally conservative given their salary cap situation. That will likely eliminate Jameis Winston and Mitchell Trubisky from being options. Instead, a group that includes Ryan Fitzpatrick, Tyrod Taylor, Andy Dalton and Joe Flacco could be options.

Either way, Philadelphia is making it clear that Hurts won’t be spoon-fed the starting quarterback job following the Carson Wentz trade. This is going to be a major storyline in Pennsylvania as the NFL offseason heats in a big way over the coming weeks.

For now, the long-awaited Wentz deal has finally come to fruition. From there, the Eagles still have a whole heck of a lot of work to do. That will include the quarterback position.

Click below for more Philadelphia Eagles news and rumors.