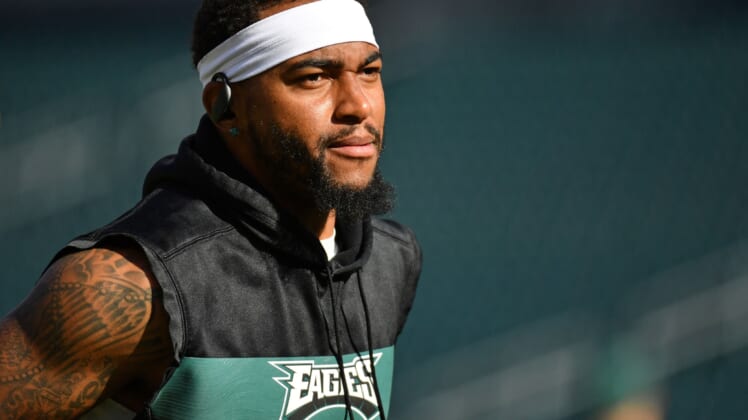 The Philadelphia Eagles are continuing to clear out their roster and reshape their offense by releasing three-time Pro Bowl wide receiver DeSean Jackson on Friday.

Just one day after trading away franchise quarterback Carson Wentz to Indianapolis, the Eagles are being very active in an effort to cut into their big salary cap deficit.

DeSean Jackson to be released by Eagles, wants to play in 2021

SiriusXM NFL Radio’s Adam Caplan confirmed Jackson would be released and noted the cap space Philadelphia will gain by parting ways with the 34-year-old playmaker:

Jackson posted a farewell message on his Instagram, captured by NFL Network’s Mike Garafolo, that suggests he’s looking for a new team to play for next season:

After appearing in just eight of a possible 32 games during his second stint with the Eagles, it makes sense the team would want to get Jackson off their books, since he was due to be a cap hit of more than $10 million had he stayed on the 2021 roster.

Electrifying as Jackson can be even at this advanced stage of his career, he’s been too banged up for Philadelphia to justify retaining him with such an expensive price tag. The last of his three Pro Bowl bids came in 2013, so it’s been a while since he’s ranked among the best receivers in the NFL.

Having said that, it’s not as if Jackson was in ideal circumstances once he left the Eagles first for Washington, who’s still figuring out its quarterback situation, or in Tampa Bay in the pre-Tom Brady, Super Bowl LV-winning era the Buccaneers just ushered in.

Can DeSean Jackson land with a championship contender in 2021?

The lack of recent productivity and inability to stay healthy definitely count as strikes against Jackson as he pursues a bid to continue his career into a 14th NFL season.

However, given his unique ability to blow the top off an opposing defense and his 17.4 yards per catch average, any team seeking a proven, veteran playmaker should take a look.

It’s not outlandish to suggest Jackson could return to Tampa Bay. Given that the Buccaneers have multiple priority free agents this offseason, it might make sense for Jackson to join up with Brady, reunite with Mike Evans and be a strong part of the Bucs’ “no risk-it, no biscuit” mentality under head coach Bruce Arians. He’d be a bargain replacement in the event Tampa can’t retain Chris Godwin or Antonio Brown.

Sammy Watkins, Demarcus Robinson and Byron Pringle are all hitting free agency for the Kansas City Chiefs, so maybe Jackson would be intrigued by the opportunity of joining forces with Patrick Mahomes and Tyreek Hill while also reuniting with his original head coach in Philadelphia, Andy Reid.

The fact that Jackson is such a good fit on paper for both participants of Super Bowl LV makes him a buzz-worthy new addition to the 2021 free agent class. If teams aren’t keen on the idea of counting on younger players to come through for them in the near term, they could do a lot worse than bringing in Jackson on a one-year trial run.

But Jackson needs to prove he can stay healthy and that he hasn’t lost more than a step, because speed and tracking the ball deep down the field are the main elements of his game.

The last catch he had? An 81-yard touchdown in Week 16 versus Dallas on a deep pass from Jalen Hurts. Seems like Jackson still has it based off of that play.