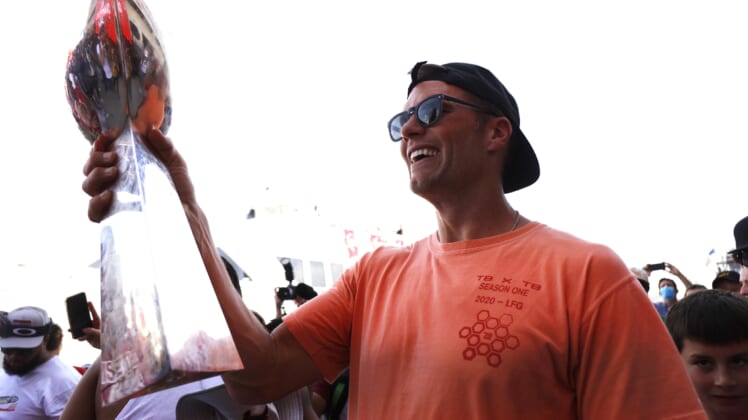 Is it possible the Bucs could repeat as champions next season? Nothing is impossible with Brady under center, but general manager Jason Licht has a tough task ahead, with a limited salary cap and plenty of free agents to sift through.

Let’s take a look at five overall moves Tampa Bay should make to ensure its roster is strong, while leaving enough cap flexibility to accommodate some other unforeseeable roster tweaks.

Barrett and Jason Pierre-Paul are wreaking havoc on opposing quarterbacks over the past two seasons. They’re as dynamically athletic as they are schematically savvy, which is a lethal combination in defensive coordinator Todd Bowles’ system.

It’s going to cost a pretty penny to keep Barrett in a Buccaneers uniform, yet it’s worth it. Being strong on the edge is as important as ever in the NFL, and Tampa Bay always has the option to backload Barrett’s deal in order to accommodate the unusually low cap set up for the 2021 campaign.

The same is true for David, who was probably the longest-suffering player who stuck around through years of losing and failing to make the postseason before finally getting his due on the big stage on Super Bowl Sunday.

David has been the heart and soul of Tampa Bay’s defense and is showing no signs of decline. He’s a prime candidate for a strong, three-year contract, which will ensure he sticks around alongside Devin White until the rising superstar inevitably rakes in his massive payday from the front office.

As for Gronkowski, he’s just so in tune with Brady and is a massive asset as one of the best run-blocking tight ends in NFL history. Oh, and is there any doubt he’s still a lethal pass-catching threat after he scored two touchdowns in Super Bowl LV? Now that Gronk is out of retirement, look for him to play through Brady’s age-45 season and ink a two-year deal at a cap figure that won’t crush Tampa’s hopes of retaining other marquee free agents.

It’d be wise for Tampa Bay to at least let Suh and Brown go test the waters in free agency. Godwin would be back if he weren’t among the most coveted players on the open market. As it stands, there’s little chance the Bucs, given their personnel priorities, can retain the three players bulleted here.

Brown seems to have turned a corner and is serious about getting his career back on track. Much of that is a credit to Brady believing in him and giving him a chance to integrate into a crowded Tampa Bay receivers room. Brown worked in the short term, but would he be willing to take a pay cut to continue his partnership with TB12 in Tampa? That is another question entirely.

The need to retain someone with Brown’s abilities might be more intense — especially with Godwin maybe gone — if Scotty Miller didn’t emerge as a legitimate deep threat and rookie fifth-rounder Tyler Johnson didn’t show so much promise with multiple clutch playoff catches.

At this juncture of his career, Suh isn’t worth a hefty price tag. He made $8 million this past season and was rated as Pro Football Focus’ 68th-best interior defender, which isn’t super impressive. Maybe Suh is willing to play for less in 2021 after achieving Super Bowl glory, but he shouldn’t be someone the Bucs feel like they must keep.

Depending on what Fournette is asking, there’s a scenario where he could return. Ronald Jones and Ke’Shawn Vaughn are also viable options for 2021 at the most replaceable position in football, yet Fournette developed a special bond with Brady, and the latter’s influence can’t be underestimated when it comes to convincing his pals to take a discount to be part of a championship quest.

Don’t sleep on the possibility that any or all of these men stay put. The Super Bowl-Brady quotient looms large.

Brady was accustomed to restructuring his contract almost every year in New England, and as he keeps trying to add to his collection of Super Bowl rings, there’s no reason to think he won’t be open to restructuring. The man is worth many millions of dollars and

Similar to David, Evans was used to racking up all kinds of ridiculous individual stats but feeling empty at the end of every season due to the absence of the postseason to look forward to. That’s no longer the case, and in following Brady’s lead, he could be one of those addicted to that Super Bowl feeling to the point where he’d rethink his contract in the near term to help facilitate the most optimal “run it back” scenario possible.

One of the more overlooked pieces to the success of the Bucs’ offense, Brate is due to have a $6.5 million cap figure next season. That could mean he finds his way out of Tampa. One reason this may not happen: Brady really developed trust in Brate in key situations where he needed a little chunk gain, as the pair connected on a ridiculously proficient 28 of 34 passes for 282 yards and two touchdowns.

Brate is a hard-nosed and willing blocker who hasn’t missed a single regular-season game in the past four years, so don’t be surprised if he agrees to a restructured contract at Brady’s behest to be a part of the Bucs’ repeat bid.

It may sound blasphemous to suggest the Bucs sever ties with two of the five starters who helped keep the 43-year-old Brady rather well-protected throughout the 2020 season, but before the outrage kicks in, there’s still a chance for both Donovan Smith and Ryan Jensen to re-sign for lesser deals if they are cut loose.

Both offensive linemen are entering the final year of their respective contracts, and especially in the case of Smith, his $14.25 million cap hit doesn’t match up with his production. PFF has Smith rated each of the past two seasons as the NFL’s No. 35 offensive tackle, which is more or less slightly below average. Other than an elite 2019 when he was second, Jensen hasn’t consistently ranked among the elite centers in the NFL at any other point in his career, and was 19th this past season, per PFF.

Stud Bucs guard Ali Marpet has proven he can play center and would more than capably fill in for Jensen if he decided not to come back at a reduced cost. It’s almost certain Smith could be talked into a renegotiated, new contract that would either at least bring him back for 2021 or be backloaded to the point that it’d accommodate the extraordinary league-wide cap situation as it stands.

The men in the trenches never get as much love as they should, particularly on offense. This is a painful area to make cuts, but Tampa Bay has to do it someplace. The Bucs are deep enough at tight end that they can set up max protection situations in case any prospective guard or tackle replacements are overwhelmed, but there really shouldn’t be a huge drop-off in performance of the o-line unit if Smith and Jensen don’t return.

That said, Jensen is last on the list for a reason: He’s an absolute mauler who opponents hate to play, and the Bucs would love to have — even if he costs $10 million this coming season.

As mentioned, the presence of Brate and Gronk at tight end make Howard expendable coming off an injury, his evident physical tools and upside notwithstanding.

For Gholston, he’s definitely a replacement-level player on the inside of the defense, which is where Tampa Bay is likely to target its first-round pick in the event both he and Suh are no longer in the fold. Experience is tough to replace, though, so if Suh gets away, expect Licht and the personnel staff to circle back around to Gholston for one more go.

The options and scenarios here — per Over the Cap’s projected franchise tag amounts — admittedly aren’t great. Godwin seems more like a fit for the transition tag if he and the Bucs can’t hammer out a long-term deal. Of course, if that happens, any team with much more cap space can simply come over the top and outbid Tampa Bay, who’d then have to match whatever offer Godwin got elsewhere and probably wouldn’t be able to.

Selling David on a franchise tag is a tough ask after all he’s given to the organization. Plus, at this point he’d almost certainly be willing to sign on for less than the cap hit would be if the Bucs tagged him.

Fournette is an interesting case. Another possibly better fit for the discounted transition tag, his big money here could be a “thank you” for his excellent run through the playoffs. On the other hand, it’d send a strange message to fellow talented back Ronald Jones, who’s going to be due for a contract extension very soon. It’d also prevent the Bucs from seeing what they really have with second-year back Ke’Shawn Vaughn.

There’s too much depth in the backfield to justify Fournette playing on the expensive projected franchise tag.

Here’s the bottom line: Brady has established a winning culture in Tampa Bay, and the state of Florida has no income tax. All these elements really help the Bucs’ cause to retain most of their key players, and if they make all or most of the recommended moves here, they should be in prime position to seize the Lombardi Trophy once again in Super Bowl LVI.