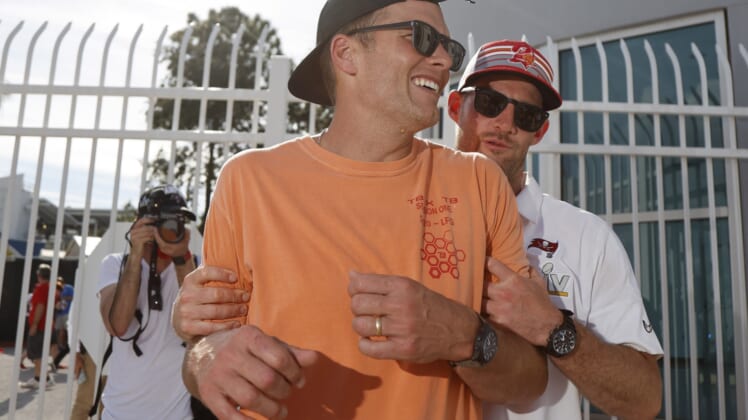 Tampa Bay Buccaneers quarterback Tom Brady was living his best life during the team’s Super Bowl parade in the Tampa area on Wednesday. The seven-time champion (that’s an actual thing) showed up to the boat parade in a new $2 million boat. That’s also a thing.

As the parade continued, Tom Terrific just seemed to be enjoying himself more and more. And a lot more. That evidenced by him literally throwing the Lombardi Trophy to teammate Rob Gronkowski on another boat. This is also a thing.

Known for his extremely healthy diet, Tom Brady is not one who often consumes adult beverages. That seemed to change in glaring fashion at the Buccaneers’ Super Bowl parade. There’s video evidence backing up this claim.

One could easily conclude that the 43-year-old Brady just isn’t a fan of being on a boat anymore. The older you are, the harder it is to maintain your balance when at sea. Then again, Brady just threw three touchdowns in a Super Bowl victory over the 25-year-old Patrick Mahomes. That doesn’t seem to be it.

Brady’s good times did not end there.

The king of social media, this future first ballot Hall of Famer more than lived up to that reputation with the above-linked tweet.

Those watching Brady live his best life had their takes on the events at the Buccaneers’ Super Bowl parade.

All joking aside, this is just great to see. Brady has worked his tail off for the past 21 years. He’s maintained a physique that 20-year-olds could scarcely imagine. He has a public reputation to uphold.

For at least one day, Tom Brady let loose. It’s a reward for years of tireless work in the public eye. In his first year without Bill Belichick in his shadows, GOAT led one of the worst franchises in professional sports history to a Super Bowl title.