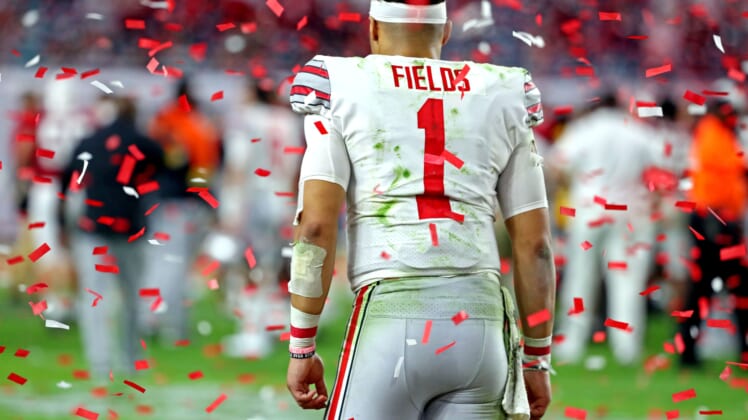 Justin Fields might be the No. 1 overall pick in a lot of other draft classes. While the Ohio State quarterback will be drafted behind star Trevor Lawrence, Fields’ array of skills will catch the eye of general manages, coaches and scouts across the NFL.

Fields and Lawrence are familiar with competing against one another. They were the top two prospects in the 2018 247 Sports’ recruiting class, with Fields graded as the top dual-threat quarterback in the country. After one season with the Georgia Bulldogs, he transferred to Ohio State and instantly became one of the best passers in team history.

While the 2020 season didn’t go exactly how Fields planned, he did more than enough to cement his status as a top-10 talent in the draft class. As teams begin to finalize their draft grades and meet with top prospects, especially quarterbacks, Fields’ stock could climb even higher.

With the 2021 NFL Draft closing in, let’s examine the best landing spots for Justin Fields.

Teams like the Chicago Bears or Washington Football Team would love to land Fields. But sitting outside the top-18 picks, there’s little chance either organization even has a shot to jump up for a top-10 pick. Given Fields is a projected top-five selection, only a few organizations will even have a shot at landing him.

The draft starts with the New York Jets. As the decision-maker in the front office, general manager Joe Douglas can either build around Sam Darnold or use the No. 2 overall pick on a new franchise quarterback. The latter is where things are headed. Once that decision is made, the choice comes down to Justin Fields or Zach Wilson.

New offensive coordinator Mike LaFleur’s scheme will borrow some concepts from Kyle Shanahan’s system. It’s a quarterback-friendly offense, which is great news for whoever starts for the Jets. But this system also requires a quarterback who can handle himself in the pocket, makes great decisions, maintains clean mechanics and can drop the football on a dime. Wilson, while immensely talented, thrives outside of structure when a play breaks down. On the other hand, Fields routinely showed at Ohio State that he can handle every situation, stay within the team’s plan and his accuracy was ridiculous.

New York can’t really go wrong with either quarterback, they would each provide an upgrade over Darnold. When considering everything that makes someone great at the position – leadership, poise under pressure, ball placement and instincts – Fields brings all of that to the table. He can be a dangerous threat to run, fitting into an offense with some RPO concepts, but stands out just as much when staying in the pocket. Fields can be a star for the Jets and they have the cap space to surround him with talent.

There aren’t many landing spots more exciting than this one. Matt Ryan will be the Falcons’ starting quarterback in 2021, but his future with the organization beyond that is uncertain. A new general manager and head coach usually means a change at signal-caller follows and it’s about time for this organization to make that change. Given the Falcons likely won’t have a top-five pick in 2022, this should be the opportunity to strike.

Justin Fields grew up in Georgia, starring at Harrison High School within a short drive of Atlanta. He wanted to become a star for the Bulldogs, but a baffling decision led to Georgia prioritizing Jake Fromm over him. This is the player fans want and for good reason, the city deserves an exciting quarterback with local ties who everyone can rally around. Of course, this is about more than just a Georgia connection.

Arthur Smith needs a quarterback who can execute his play-action attack. That’s something Fields is very familiar with, given the number of play-action deep shots Ohio State took with him under center. Not only does he have the arm to launch a ball 50-plus yards right into a receiver’s hands, he also brings the athleticism to buy additional time for things to open up. The Falcons could help refine his game, while Ryan holds down the job. Then, in 2022, Fields goes wild with Julio Jones, Calvin Ridley and a top running back behind him.

Team owners dictate a lot of decisions in the NFL Draft. That’s especially important to consider this offseason, with David Tepper desperate to upgrade over Teddy Bridgewater. Deshaun Watson is the organization’s dream target, but he isn’t available. So, it’s pretty safe to bet on Carolina exploring every avenue to trade up for a quarterback.

The Panthers already have the surrounding cast for a quarterback to excel. Christian McCaffrey is an All-Pro runner and pass-catching weapon, DJ Moore is an emerging star and Robby Anderson is a 1,000-yard receiver. To top it off, offensive coordinator Joe Brady is one of the smartest people in the NFL and his scheme can be a paradise for the right quarterback.

Fields would start instantly for the Panthers, stepping in and taking the ceiling off this aerial attack. His dual-threat ability would make life easier for McCaffrey and Brady’s ability to get his playmakers in space would be taken advantage of by a quarterback with pinpoint precision and a quick release. Even when Brady leaves to become an NFL head coach in 2022, Fields can be the Dak Prescott of Carolina’s offense.

The 49ers are propping up Jimmy Garoppolo right now, making it sound like he remains their guy. That might be the case right now, but everything can change in an instant. If Fields makes it past the fourth pick or the Miami Dolphins are open to the right offer to move down from the No. 3 spot, there is a phenomenal opportunity for San Francisco to strike gold.

Trey Lance gets discussed as an option for the 49ers, but he’s far too unpolished for Kyle Shanahan. While there are some intriguing elements with Mac Jones, he doesn’t offer enough physical tools to help push a team to the Super Bowl. That’s what makes Justin Fields perfect for the 49ers.

Like with New York, As noted by NBC Sports’ Derrik Klassen, approximately 22% of Fields’ throws came were within 6-10 yards. Ohio State asked him to mack quick throws, putting the football in the hands of his weapons almost instantly. Shanahan takes a similar approach, always wanting to find ways to feed Debo Samuel, Brandon Aiyuk and George Kittle as quickly as possible.

Where he would really make a difference is his arm strength and athleticism. We could see far more RPOs and rollouts with him at quarterback, paired with more vertical shots down the sideline. Given this team reached the Super Bowl with Garoppolo, it’s not hard to imagine them winning one in a few years with Justin Fields.

Related: 5 teams who are a perfect fit for Alabama QB Mac Jones in 2021 NFL Draft

Bill Belichick doesn’t draft quarterbacks in the first round and he doesn’t like trading up. Both of these statements hold a lot of truth, but the greatest coach in NFL history also knows when it’s time to adapt. The Patriots were embarrassed last season, missing the playoffs and left watching Brady hoist the Lombardi Trophy for another team. If that wasn’t a wake0-up call for the organization, nothing ever will be.

On paper, this might not seem like a great fit for Justin Fields. New England rightfully draws criticism for failing to even put an adequate supporting cast, putting it mildly, around its quarterback. A receiving corps with N’Keal Harry, Damiere Byrd and a 34-year-old Julian Edelman won’t get it done. That’s where the $65 million in cap room comes into play.

If Chris Godwin doesn’t receive the franchise tag, the Patritos can make him one of the highest-paid receivers in the NFL. Fortunately, since he is likely staying in Tampa Bay, there are other great options. Both Kenny Golladay and Allen Robinson are impending free agents. Even if they get tagged, both stars are expected to be available for a 2021 NFL Draft pick. New England could afford to land one and would still have enough money to sign Hunter Henry, Will Fuller or Corey Davis.

Justin Fields then becomes way more exciting in New England. While Josh McDaniels isn’t the offensive mastermind some once thought, he also hasn’t had a lot of help. Fields offers the size to handle the Cam Newton role in the red zone and he’s far superior as a passer. Plug that into this scheme, with an overhauled receiving corps, suddenly the Patriots look a lot better.