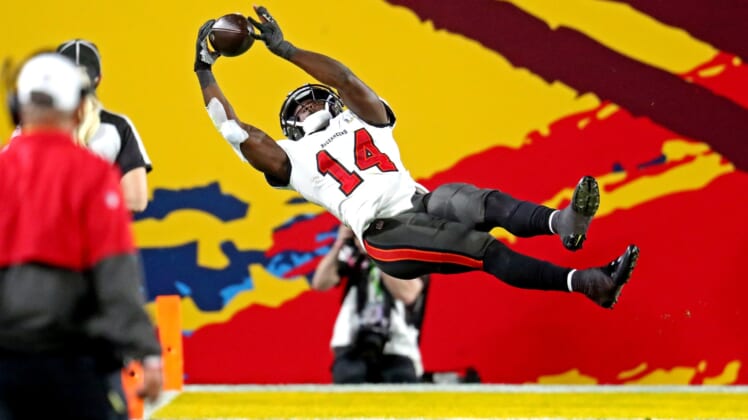 Tampa Bay Buccaneers wide receiver Chris Godwin was one of the reasons Tom Brady picked this team. A year later, the Buccaneers are Super Bowl Champions and Godwin will be cashing in this offseason as one of the top pending free agents.

A third-round pick in the 2017 NFL Draft, the former Penn State Nittany Lions star has worked his way up to become a Pro Bowl wide receiver. With the Buccaneers hoping to run it back next season and the cap room to pull it off, Tampa Bay could be in the perfect position to reward Godwin with a well-earned contract.

The Athletic’s Greg Auman, who covers the Tampa Bay Buccaneers, expects Godwin to be tagged this offseason. While some consideration might be given to Shaquil Barrett, the free-agent market for him reportedly won’t be as strong as Tampa Bay will likely want to prioritize the younger player among its top pending free agents.

Related: Chris Godwin predicted to sign with New England in 2021

Godwin, who turns 25 on Feb. 27, would be one of the most coveted players on the open market this offseason. After a relatively quiet rookie season in 2017, Tampa Bay’s 6-foot-1 receiver quickly got comfortable. He broke through for 842 receiving yards and seven touchdowns in 2018 before making a gigantic leap in 2019.

With Jameis Winston under center, Godwin hauled in 86 receptions for 1,333 receiving yards and nine touchdowns. The phenomenal campaign earned him a spot in the Pro Bowl and he was voted second-team All-Pro, despite missing two games.

Upon Brady’s arrival, Godwin switched jersey numbers and accepted a smaller role in the passing game. With his future Hall of Fame quarterback spreading the ball around to Mike Evans, Rob Gronkowski and Scotty Miller, Godwin only saw 84 targets in 12 games. He still impressed when the football came his way, snagging 65 catches for 840 yards and seven touchdowns.

Godwin can be the No. 1 receiver for quite a few NFL teams. The Baltimore Ravens, New York Jets and Indianapolis Colts all stand out as great landing spots for him in free agency. But the Buccaneers offer him a chance to win another Super Bowl, while teaming up with a legendary quarterback and another great receiver.

Ultimately, the franchise tag could work out well for Godwin and the Buccaneers. The team guarantees its star wide receiver returns next season, making Brady and Bruce Arians happy. Meanwhile, Godwin gets $16-plus million and can test free agency in 2022 with the salary cap expected to rise.