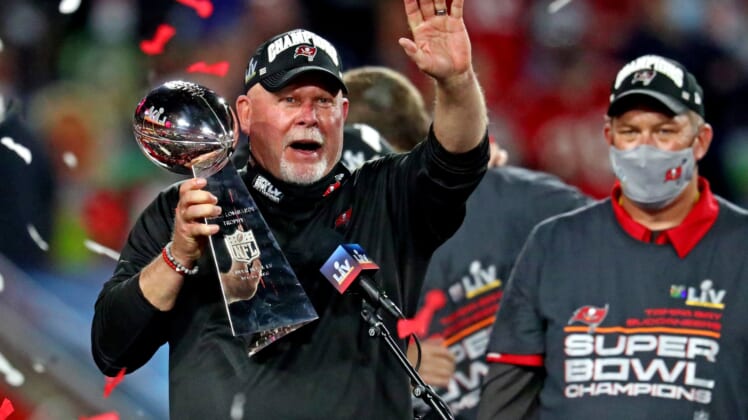 Tampa Bay Buccaneers head coach Bruce Arians publicly spoke about the team’s tricky free agency situation in 2021 as the reigning Super Bowl LV champions try to keep as much of their roster intact as possible.

Despite the potentially untenable situation of returning so many star players, Arians expressed optimism most of the Bucs’ championship core can remain intact.

Greg Auman of The Athletic reported Thursday on what Arians had to say regarding Pro Bowlers such as Chris Godwin, Rob Gronkowski, Shaquil Barrett, Lavonte David, Antonio Brown, Leonard Fournette and others hitting the open market:

The NFL’s salary cap minimum has been raised to $180 million, which is still lower than usual because of the COVID-19 pandemic. However, it’s still going to take a big effort from Bucs general manager Jason Licht to keep so many big names in the fold.

But perhaps the biggest priorities for the long haul are securing defensive cornerstones like Barrett and David, while still making sure Brady has enough weapons around him on offense to continue thriving in his age-44 season.

Arians proved he has an excellent staff in place, and with offensive and defensive coordinators Byron Leftwich and Todd Bowles returning for 2021, there’s reason to believe in the Bucs’ chances to raise the Lombardi Trophy once again.

The free agent that seems most likely to get away is Godwin, simply because receivers are going to command a ton of money on the open market, and even if Brown doesn’t return either, Brady would still have the likes of Mike Evans, Scotty Miller and Tyler Johnson to throw to, not to mention tight ends Gronk and Cameron Brate.

Given how much success the Bucs had while Brady learned a new offense on the fly in 2020 and integrated Brown and Fournette into the lineup very late, Arians can adapt to whatever personnel is on offense.

Bucs running back Ronald Jones is entering a contract year and will be motivated as ever to prove he’s the lead back whether or not Fournette returns. The position is among the most replaceable in football, and Tampa has a rising second-year back in Ke’Shawn Vaughn who can probably get the job done in a situational role.

But as Arians indirectly alluded to, the culture he’s helped create in Tampa Bay and the fun the Bucs had en route to a championship will be factors that make players want to run it back for another chance at Super Bowl glory.

The unique salary cap restrictions of this NFL offseason may actually help Licht and the front office in their bid to keep players on for at least another year. While most stars will want to maximize their earnings, they could either agree to backloaded contracts that will escalate as the NFL cap goes higher in subsequent years, or sign discounted one-year deals before renegotiating in 2022.

Whatever happens in free agency, as long as Brady remains healthy behind a solid offensive line and Bowles’ defense retains either Barrett or David, the Bucs should continue to be among the Super Bowl LVI favorites and certainly the odds-on choice to win the NFC South.