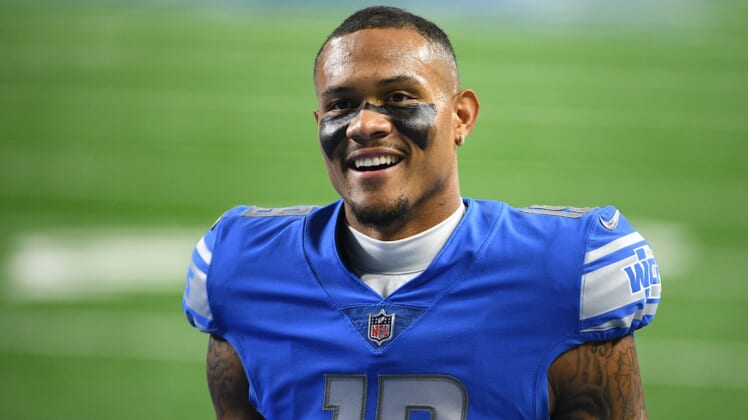 The Detroit Lions appear to be changing things up on a fly this offseason. That could now potentially include moving off wide receiver Kenny Golladay.

As you likely already know, the 27-year-old Golladay is set to become a free agent next month after struggling through injuries in 2020. If he were to hit the open market, the former Pro Bowl pass catcher would be one of the top NFL free agents at the wide receiver position.

However, it’s highly unlikely that the Lions will let Golladay test free agency. In no way does this mean he will return to Detroit for a fifth season.

“Teams can begin assigning franchise tags Tuesday, and through March 9. Over the Cap projects the 2021 wide receiver franchise tender at $16.4 million,” Nick Baumgardner of The Athletic reported Monday. “If the Lions can find a trade partner interested in Golladay long term, getting him to sign the tender before trading him feels like a manageable option.”

The NFL insider went on to note that the going rate for Kenny Golladay in a tag-and-trade scenario would likely be a second-round pick.

It has not been a common occurrence for teams to place the franchise tag on an impending free agent, only to trade him after the fact. However, we did see it with Jarvis Landry and the Miami Dolphins a couple years back. NFL rumors suggest that the Chicago Bears are considering the same option with fellow receiver Allen Robinson this offseason.

Following the trade of Matthew Stafford, Detroit finds itself $1.58 million over the cap. Paying out an estimated $16.4 million to Golladay under the franchise tag might not make much sense.

A third-round pick from Northern Illinois back in 2017, Golladay jumped on to the scene as a sophomore the following season — recording 70 receptions for 1,063 yards. He then followed that up with another 1,000-yard campaign in 2019, leading the NFL with 11 touchdown catches in the process. Injuries slowed down the star receiver this past season, but that’s not going to hinder his market too much.

It’s being estimated that the receiver’s market is $16-plus million annually. Given the NFL salary cap situation, said market might not be as robust.

Even then, any number of teams would be interested in acquiring a receiver of this ilk who is just now entering his prime. Of those with a ton of cap room, the New York Jets, New England Patriots and Miami Dolphins in the AFC East make a ton of sense.

In particular, Miami is going to be targeting receivers in free agency and boasts an additional second-round pick from the Houston Texans in addition to its two first-round selections.

The Indianapolis Colts, Baltimore Ravens and San Francisco 49ers are also going to be in the market for wide receivers during NFL free agency.

Of those three teams, Indianapolis is in the best cap situation. It is also going to be looking for a top-end pass-catcher to team up with the recently-acquired Carson Wentz. Could Kenny Golladay be an option?

Click below for more Detroit Lions news and rumors.