How the Detroit Lions can launch a full-scale rebuild, create a bright future 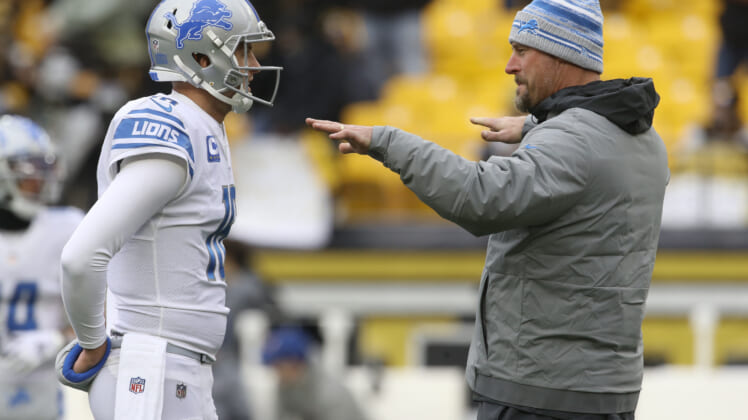 Sitting at the bottom of the NFL standings and playing on Thanksgiving are two staples of the Detroit Lions‘ history. With another loss sending this franchise rocketing towards the No. 1 pick in the 2022 NFL Draft, it’s time for the organization to create a new strategy for the future.

When Detroit signed head coach Dan Campbell to a six-year contract, it knew this was going to be a long process. But even with the bar of expectations set remarkably low for the 2021 NFL season, the Lions have fallen short of them once again.

Staring down the possibility of a winless season, a remarkably patient fan base is growing tired. The Lions have made the playoffs just three times since 2000 and last won a postseason game in 1991. Two decades of horrifying football with general managers and coaches cycling in and out and two future Hall of Famers ending their careers early to avoid being burdened with another year of playing for one of the worst teams in sports.

It’s the result of ineptitude and inexcusable decision-making at the highest levels. The examples are an endless list, but recent moves highlight why this franchise is in its current position. Firing Jim Caldwell, who went 36-28 across four years and has the fourth-best winning percentage in franchise history, then bringing in general manager Bob Quinn and head coach Matt Patricia set this franchise back several years.

The decision not to draft Justin Fields or Mac Jones, who both look like franchise quarterbacks, made by general manager Brad Holmes, dug the hole even deeper.

It’s evident from the 2021 season that a quick turnaround isn’t happening. But with the right approach in the upcoming offseasons, Detroit could chart a path towards sustained success.

Why the Lions should trade for Sam Darnold

The Carolina Panthers traded second-, fourth- and sixth-round picks for Sam Darnold, hoping a change of scenery would unlock something in the former No. 3 overall pick. It was a poor decision and doubling down on it by picking up his fifth-year option, guaranteeing an $18.858 million salary for 2022, only made it worse.

Carolina will be in the quarterback market this offseason, it’s the only way for them to become a legitimate contender. David Tepper, one of the richest owners in the NFL, desperately wants a signal-caller who can be the face of the franchise and can help a talented roster reach the Super Bowl. To do that, the Panthers likely need to unload Darnold’s contract.

The Lions are projected to have $40 million in cap space next year, per Over The Cap. Considering top talent won’t sign with Detroit and veterans will be eyeing contenders, spending in free agency isn’t a realistic option. So, taking on a bad contract in exchange for a top pick is the smart move.

Making this trade immediately signals the team is giving up on competing in 2022, but Detroit would likely be at the bottom of the standings anyways. So, a franchise in desperate need of cheap, young talent would be wise to essentially buy a second-round pick.

In 2022, the Lions can hold a quarterback battle between Darnold and Jared Goff. Both quarterbacks are more than capable of leading this team to a top-3 pick in the 2023 NFL Draft. It requires ownership to bite the financial bullet, spending $48 million on two bad quarterbacks, but it’s worth it. When the 2023 offseason rolls around, Detroit frees up $38.65 million in cap space between Darnold’s expired contract and cutting Goff ($20.65 million savings).

Well, well, well, if it isn’t the consequences of the Lions’ action. Passing on Fields and Jones landed a great offensive tackle, but the Lions land the No.1. pick in a draft without a surefire quarterback to select. Instead, Oregon edge rusher Kayvon Thibodeaux is the consensus top prospect.

Thibodeaux can be a great player, but he isn’t a generational talent and certainly not the kind of player who will instantly fix the Lions. So, Detroit needs to field calls for the 1st pick and find the best option that allows them to trade down while gaining more capital.

Using Pro Football Network’s draft simulator, Detroit trades the 1st pick to the Philadelphia Eagles for the 8th, 44th and 75th pick along with a 2023 first-round selection.

Ignoring the quarterback position again is a risk, but the focus here is on building a much better roster. Wilson can be a bonafide No. 1 receiver in the NFL, a go-to option for whoever becomes the Lions’ long-term quarterback. This draft also focuses on the defensive side, which is crucial in an NFC North that is becoming loaded with playmakers.

Young talent on both sides of the ball will help the Lions stay well below the salary cap for several years, putting them in a great spot for long-term success.

The assembled roster can spend the 2022 season gaining experience and working with a coaching staff that helps them develop. As for Campbell, since he doesn’t seem to create issues within the locker room as Patricia did, he can stick around another year.

Detroit would finish with one of the worst records in 2022 and a top pick and it would finally be the time to get the quarterback. Bryce Young, C.J. Stroud and D.J. Uiagalelei are all generating far more buzz than any quarterback from this year’s class. Whichever emerges as the top quarterback prospect, Detroit will either be in a position to land them or to move up for their highest-rated passer.

It sets up the 2023 offseason. With more than $80 million in cap space and a supporting cast that is perfect for a rookie quarterback. Campbell can be fired and the Lions’ vacancy will be one of the most coveted in the NFL.

A brilliant offensive mind will design plays for an offense with a franchise quarterback on a rookie contract, an outstanding offensive line, playmakers in the backfield and on the outside. On top of that, Detroit’s defense could be better than we’ve seen in several years.

While this plan does ask the fans to sit through another embarrassing NFL season for this franchise, it gives this team a real shot at long-term success. Everything else the Lions have tried has failed, it’s time for something new.