As the Nov. 2 NFL trade deadline nears, some players will undoubtedly be changing teams. As the small potatoes get divvied out, all eyes remain on the Deshaun Watson situation coming to a resolution with the Houston Texans. As several organizations around the league are now realizing they are stuck in yet another season without a franchise quarterback, it’s only natural to assume each team without one would inquire about trading for Watson.

Though it’s important to note that Watson has a full no-trade clause, giving him complete control over which team he heads to. This simple fact takes several teams out of the running for any potential trade of the franchise QB.

Legal battles aside, if Watson were cleared to play, he likely could lead several squads currently on the outside looking in to a playoff berth. Imagine the Carolina Panthers led by Watson and Christian McCaffrey when he returns to health?

Or in the NFC East where each team perpetually chases the Dallas Cowboys, wouldn’t Watson immediately give the Philadelphia Eagles or Washington Football Team a chance to reach the playoffs this season? In Pittsburgh, Watson replacing Big Ben would probably suit the Texans QB just fine since he’s used to getting sacked 40+ times per season. 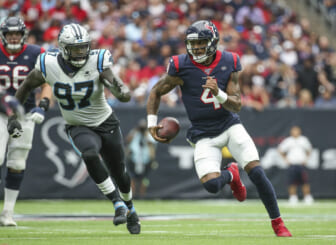 While the three-time Pro Bowl quarterback could likely lead several teams around the league into postseason contention, none of that matters. As Ian Rapoport reports, Watson has only waived his no-trade clause for one team in the NFL. The 1-6 Miami Dolphins.

This shouldn’t surprise anyone with how steadfast Dolphins’ owner Stephen Ross has remained in his pursuit of a franchise quarterback. Or, even with the news that a formal agreement has been made, for a Watson trade to Miami.

We also learned Watson has rejected a trade to the Eagles, taking them off the table.

Still, it’s a bit surprising that Watson hasn’t waived his no-trade clause for another team, such as Washington, Carolina, or Pittsburgh, but we don’t know all the details of what’s going on behind the scenes. We don’t even know if Watson will play again. 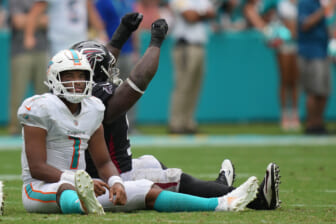