Talk about a matchup between two extremes. Dallas’ offense has an ability to dominate on a consistent basis. Meanwhile, the Panthers’ defense has given up a total of 30 points during their 3-0 start to the season. Not having Christian McCaffrey due to his hamstring injury could set the Panther offense back. In what should be a close game, we’ll go with the home team.

All our predictions are based on the Panthers keeping and starting these key players:

See where the Panthers fall in our latest NFL power rankings

Sam Darnold has to be pleased to win against his former team in his debut, he had such an advantage in terms of weapons and overall talent around him. However, he managed only three second-half points. Meanwhile, his Jets successor, Zach Wilson, gave Gang Green a chance to win in the end after a humbling start, despite running for his life all afternoon. 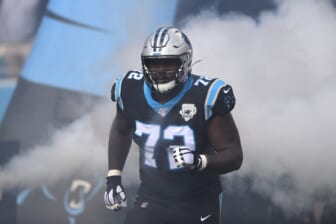 Because Drew Brees is no longer walking out from that visiting Saints locker room, Carolina had to feel so much more at ease. The historically mistake-prone Jameis Winston beat out Taysom Hill to be Brees’ successor, and Darnold can strayed away from his turnover-filled past on Sunday to put on an excellent performance. Winston threw two picks and couldn’t get anything going, as this Panthers defense looks legit.

Don’t look now but these Panthers are now 3-0 on the season after what has to be described as a dominating performance against Houston in Week 3. Continuing his stellar play, recently-acquired quarterback Sam Darnold completed 23-of-34 passes for 304 yards with two rushing touchdowns. The only concern here is the hamstring injury Christian McCaffrey suffered in the win.

Unless Jalen Hurts really shows something as an NFL sophomore, he faces an uphill battle to be a franchise quarterback. The Eagles don’t have enough depth in their defensive backfield to hang with Carolina’s receiver trio of DJ Moore, Robby Anderson and Terrace Marshall Jr.

These are two of the most evenly matched teams on the entire NFL schedule. Both are built similarly, with elite running backs, excellent receiving duos, and talented-but-flawed defenses and quarterbacks. The tie goes to the home team here.

This is going to be fun, because once upon a time, Giants general manager Dave Gettleman essentially tanked Carolina’s roster into oblivion with a series of horrible draft classes. This new Carolina regime will have a little something extra in terms of bragging rights if the Panthers pull this one out, and they actually match up well with New York personnel-wise.

When Darnold infamously was “seeing ghosts” on live national TV, he was facing New England. The young QB hasn’t displayed the football wherewithal since then to show he can outfox the legendary Bill Belichick. Even with a much better supporting cast in Charlotte, don’t expect Darnold to take down the mighty Patriots.

Because of Kyler Murray‘s dual-threat ability and presumed progression entering his third season, the Cardinals are a trendy pick to make the playoffs. They’ll be hard-pressed to do that in the NFC West, though, so they must beat inferior opponents at home when the opportunities arises. This is one such occasion. 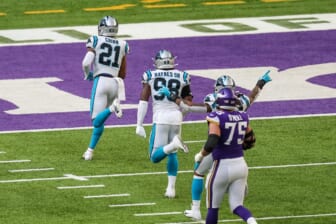 Washington QB Ryan Fitzpatrick has Curtis Samuel, Terry McLaurin and Dyami Brown who can all beat the Panthers deep. That’s what this matchup boils down to. Plus, the Football Team has an elite front that can stymie McCaffrey and pressure Darnold by only rushing four. Not the best of news for the Carolina faithful hoping an upset is in the offing.

If McCaffrey can’t get going on the ground, Darnold is going to have a hard time completing anything on the Dolphins’ stout secondary. It’s not like Tua Tagovailoa is a phenomenal quarterback either, though, so expect the hosts to pull this one out in a low-scoring grind of a game. 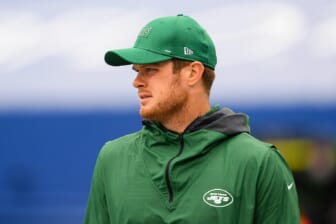 Shootouts are probably going to be commonplace for these two teams in 2021. Because Atlanta has fewer promising young players on defense, though, the Panthers should find a way to pull off the season sweep here.

The road schedule for Carolina presents a lot of pitfalls, not least of which is a trip to Buffalo. Josh Allen is Darnold’s draft classmate, but made an extraordinary leap in Year 3 to run laps around him as a quarterback. That’s bad news for the Panthers, and it’s a fact that’ll be exposed for all to see in Week 15.

Any time. Any venue. Doesn’t matter. Home cooking won’t save the Panthers from getting blown out by the Buccaneers. The only area Carolina has a talent edge is in the backfield with Christian McCaffrey. Otherwise, this is a complete mismatch. 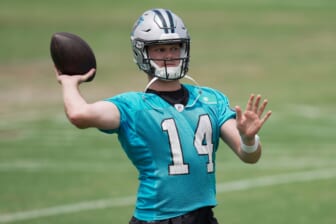 Also Read:
5 reasons why Carolina Panthers can turn their franchise around in 2021

Playing at the Superdome is never easy, and there’s a familiarity factor here, as Panthers offensive coordinator Joe Brady spent time on the Saints staff under Sean Payton. Due to Payton’s superior experience and New Orleans’ better all-around defensive talent, it’s hard to envision New Orleans not getting at least one win off Carolina this year.

Asking Darnold to square off with the Super Bowl champion Buccaneers, who are returning all their starters on offense and defense, is a big ask — never mind doing so twice in a three-game span to finish the schedule. Tom Brady and the Bucs have too many weapons for the Panthers to ultimately keep up with.