Protecting homefield. It’s an onus that Ron Rivera and Co. can’t shy away from. The good news? New York has won just seven of its past 32 road games dating back to 2017. With these teams pretty much evenly matched, that should be the difference in this Week 2 outing.

Now that Ryan Fitzpatrick has been named starting quarterback, the attention turns to the skill positions. Antonio Gibson dazzled to the tune of 1,042 total yards as a rookie after transitioning from wide receiver at Memphis. There’s heightened expectations for Gibson in D.C. heading into his sophomore campaign.

“You can tell he’s (Gibson’s) matured, got a better feel and understanding,” Washington coach Ron Rivera said back in June. “Those natural instincts that you look for, the intangibles that guys that have been playing the positions their whole career naturally have. You start to see those come to light with Antonio. It’s exciting.”

With McLaurin doing his thing at wide receiver, whoever is under center should have an improved skill-position group to work with.

Meanwhile, WFT’s defense is one of our top dogs in the NFL leading into Week 1 with reigning NFL Defensive Rookie of the Year Chase Young leading the way. Young will join forces with the likes of recently-extended Jonathan Allen, Daron Payne and Montez Sweat to form one of the best defensive lines in the NFL.

For Washington, it’s going to be all about how the team’s secondary performs behind this defensive line. The addition of cornerback William Jackson III from the Cincinnati Bengals during free agency will help matters in that regard.

With Ryan Fitzpatrick having to exit due to a hip injury, Tayler Heinicke had to come in under center for Washington. A game that included a sewage pipe bursting also saw Washington lose its regular-season opener by the score of 20-16. Its vaunted defense also allowed Justin Herbert to complete 31-of-47 passes for 337 yards in the loss.

Josh Allen and the Bills could very well be a good barometer of where the WFT is at this season. In fact, Buffalo’s trajectory is something that a defensive-minded Ron Rivera envisions with his squad. Unfortunately, Washington is a year away from being able to go into a hostile environment in Buffalo and coming out on top.

Washington is a different mold of team in the modern NFL. It’s going to rely on a dynamic rushing attack and dominant defense in hopes of repeating as NFC East champs. Everything that WFT has done this offseason is building to that. It’s just not a great matchup for a Falcons team that wants the ball in the hands of quarterback Matt Ryan and Co. That’s especially true that Julio Jones is now a member of the Tennessee Titans.

The Saints are going to be a vastly different team without Drew Brees in the mix. There’s going to be more of a reliance on the running back with Alvin Kamara and a defense that has some holes. This should work to Washington’s advantage come 5. After all, Ron Rivera’s defense is more than likely set to finish in the top 10 stopping the run in 2021. 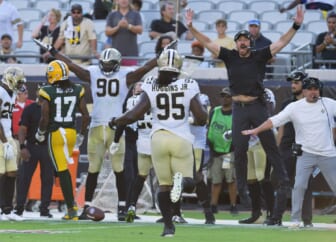 Upset alert. Washington has the talent at all three tiers on defense to be able to pull off what would be one of the biggest statements of the 2021 NFL season. Primarily, its ability to go sideline-to-sideline should help against the likes of Tyreek Hill. Playing ball control offense against a Chiefs defense that gave up nearly 2,000 rushing yards a season ago will also help matters in this regard.

At issue here for Washington is the home-field advantage Lambeau brings to the table coupled with a slightly above-average offense led by Ryan Fitzpatrick. It will lead to yet another road loss against a stout Packers defense.

Whether it’s Teddy Bridgewater or Drew Lock under center for the Broncos in 2021, we’re looking at some low-scoring affairs in the Mile High City. When you take into account Washington’s stifling defense, this is magnified further. In what should be a hotly-contested affair, I am going with the home team to do just enough to come out on top.

A rematch of last season’s NFC Wildcard Playoff, Washington surprised the masses by playing it close against Tom Brady and Co. back in January. It lost by the score of 23-21 with Taylor Heinicke getting the start. While Ryan Fitzpatrick is an immediate upgrade, I just don’t see WFT coming out on top against the defending champs.

The Ron Rivera revenge game. Could it end in sweet victory for Washington? I am not too sure. The Panthers seemingly match up well against WFT’s collection of elite defensive talent. Christian McCaffrey’s ability to get out on the boundary coupled with the ascension of wide receiver D.J. Moore leads me to believe Rivera will be licking his wounds following this Week 11 matchup.

Washington will be able to score points against a Seahawks defense that lacks a ton of talent outside of Jamal Adams. The only question here is whether its defense will be able to protect the boundaries against D.K. Metcalf and Tyler Lockett. In what should be a close and unusually high-scoring affair for Washington, I am going with Ron Rivera and Co. to hold court at home.

There’s every reason to believe Allegiant Stadium will be rocking in Vegas this fall after fans were not permitted to attend games in the Raiders’ debut 2020 campaign in Sin City. That’s going to play a huge difference, especially in games against evenly-matched opponents. I expect Derek Carr and Co. to do just enough to take advantage of that.

Washington posted a disastrous 3-5 record at home a season ago. It didn’t impact the eventual division winner due to the NFC East being so poor. But this must change for Ron Rivera and Co. come September. The good news? Washington has the talent in the trenches to enforce its will at home against a Cowboys team that has struggled in that regard recently. It should lead to a narrow home win.

Philadelphia just does not match up well against Washington. Sure Jalen Hurts is more mobile than Carson Wentz. But a defensive line led by Chase Young and Montez Sweat will have the greenish quarterback running for the hills. Meanwhile, Washington’s running back group should have a field day against an Eagles defense that finished in the bottom 10 stopping the run a season ago.

In their two games a season ago, Washington outscored Dallas by a combined margin of 66-19 in sweeping its division rivals. Unfortunately, we’re not going to see a similar Cowboys team in 2021. Dak Prescott returns healthy. Their defense is improved under coordinator Dan Quinn. At the very least, it will lead to Dallas holding serve at home.

Noticing a theme? I am in no way sold on the Eagles being able to match up with Washington in 2021. Primarily, its inability to stop the run and issues in the defensive secondary could be the team’s biggest Achilles’ heel. Washington is also in a position to take advantage of that. It will lead to a season sweep of the Eagles.

Noticing another theme? Home-field advantage will play a major role in NFC East division battles now that teams are going to welcome fans back in attendance at 100% capacity. That’s no more true than in this rivalry matchup between two pretty even teams. Washington has won just two games against the Giants in Jersey since the 2011 season.