While Dallas Cowboys fans will be hoping and praying that franchise quarterback Dak Prescott will be able to return to the lineup in a month’s time, an expert in the surgery he underwent on Monday suggests a comeback after six weeks is more likely.

The Cowboys had a rough start to their 2022 campaign on Sunday night. Not only did they have a poor overall showing in their Week 1 loss to Tom Brady and the Tampa Bay Buccaneers, but Prescott also fractured a bone in his throwing hand. It was a worst-case scenario that forced Dallas to rethink its plans and aspirations for the first half of the season.

Originally, the prognosis was that the 29-year-old could be out for the next two months. However, after undergoing a procedure to repair the break earlier this week, the organization received some good news about the timeline for their quarterback’s recovery. It was so promising that the team chose not to put Prescott on injured reserve because they are hopeful he could be back on the field in a few weeks.

To get down to the nitty-gritty medical details of the situation, on Wednesday The Athletic spoke with orthopedic surgeon Kathleen E. McKeon, MD. — an expert who specializes in hand and wrist surgeries. While McKeon admitted that based on the healing process Prescott could be throwing a football in one or two weeks, the team’s hopes for a return in a month are just that, hopes, and not reality. 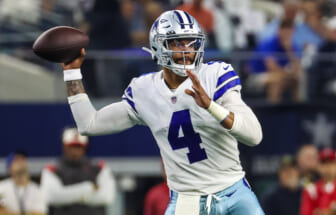 Over the next six games, the Cowboys face a mix of contenders and teams expected to have losing records. After facing the Cincinnati Bengals this Sunday, Dallas faces the New York Giants, Washington Commanders, Los Angeles Rams, Philadelphia Eagles, and Detroit Lions.