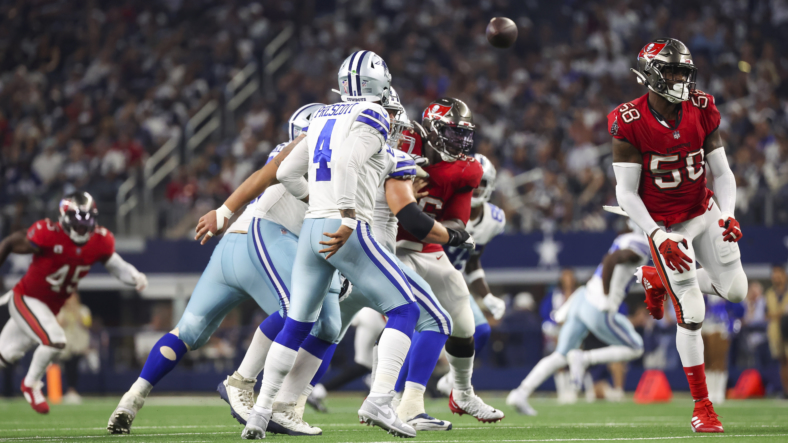 Dallas Cowboys quarterback Dak Prescott will miss significant time following surgery for his fractured thumb, but he might not be out as long as the team initially feared.

Initial reports suggested Prescott would miss 6-8 weeks of action, projecting a return after the Week 9 bye. Following the surgery, though, Tom Pelissero of NFL Network report that Prescott could return in 4-6 weeks with an Oct. 16 matchup against the Philadelphia Eagles viewed as the best-case scenario for a return.

Missing only four games would be an ideal outcome for Dallas after many feared the injury would effectively wipe out the Cowboys’ playoff chances. However, even a four-game absence would suggest that the Pro Bowl quarterback would be placed on injured reserve.

Appearing on 105.3 The Fan in Dallas, Cowboys owner Jerry Jones revealed that the team is not placing Prescott on injured reserve. He also expressed a lot of confidence that Prescott will return sooner than anticipated.

Impact of Dak Prescott not being placed on injured reserve

Under NFL rules, any player placed on IR is required to miss four games before they can be activated. While most teams would likely place Prescott on injured reserve immediately to create an open roster spot, Dallas seems intent on maintaining its hope for a return far ahead of schedule.

Jones’ comments also suggest that the Cowboys won’t be aggressive in their pursuit of a viable backup quarterback. Cooper Rush, who just came off the practice squad, is now the only healthy quarterback on the roster.

If the Cowboys truly believe Prescott could return to action by Week 5 or 6, it rules out a potential trade for Gardner Minshew or Jimmy Garoppolo. Instead, the franchise could add Will Grier from the practice squad or it could pursue Tim Boyle from the Detroit Lions practice squad. Notably, Boyle was on the Green Bay Packers roster in Mike McCarthy’s final season with the franchise.