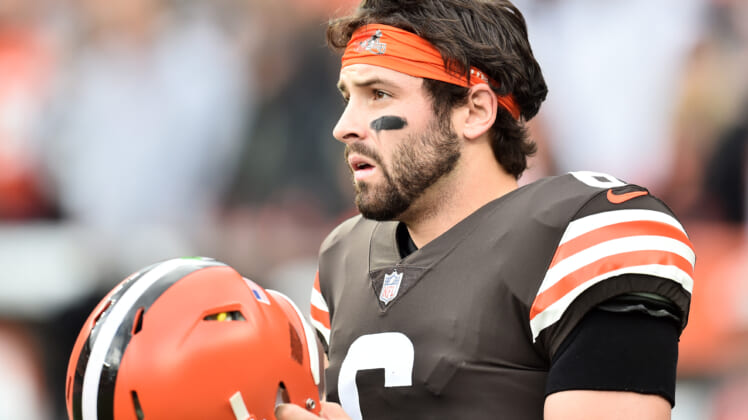 Despite rumblings of the Cleveland Browns possibly trading Baker Mayfield to the Carolina Panthers for their starting quarterback Sam Darnold, a league source claims that is “not happening.”

Mayfield being traded by the Browns has been the most consistent 2022 offseason story and it still has no clear end in sight. The relationship between the first-overall pick in the 2018 draft and the organization deteriorated when the team traded for his replacement in former Houston Texans QB Deshaun Watson.

However, even with Watson mired in serious sexual assault allegations, and there being a real possibility that he does not play this season, Mayfield remaining on the team as a stopgap seems highly unlikely. Unfortunately for the Browns, with Mayfield making $18.8 million this season a trade this far into the offseason has proven difficult.

Related: Cleveland Browns schedule – Predictions for all 17 games in 2022

That is why some have suggested — including on this site — the former Oklahoma University star be traded for Panthers QB Darnold. Carolina is the one team that has most closely been linked in a deal for Baker Mayfield over the last few months, and a swap of the two signal-callers who are making exactly the same money in 2022 is a logical option.

It seems logic and reality will not meet if the two organizations are able to agree on a deal, however. On Wednesday, Cleveland.com sports writer Mary Kay Cabot revealed that a league source informed her they were “confident” a swap of the two 2021 starters was “not happening.”

The report adds that the team isn’t interested in trading for Darnold — a player that was drafted two spots behind Mayfield four years ago — and that the Browns are comfortable with Jacoby Brissett possibly starting games this season and Josh Dobbs serving as the backup and eventual third QB when Watson is allowed to play.

Separate reports last week also stated Cleveland would be willing to pay half of Mayfield’s contract in a possible trade before the season.