Deshaun Watson: ‘I just want to clear my name’ 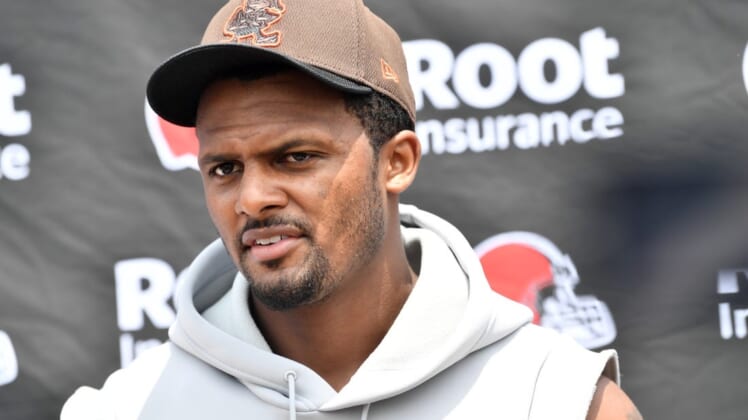 Cleveland Browns quarterback Deshaun Watson denied engaging in sexual misconduct with any of the 24 massage therapists who have filed lawsuits against him.

“I’ve never forced anyone. I’ve never assaulted anyone,” Watson said Tuesday, speaking to reporters for the first time since his introductory press conference with Cleveland on March 25. “I’ve been saying it from the beginning and I’m going to continue to say it.”

Watson, 26, answered questions for about 10 minutes on the opening day of Cleveland’s mandatory minicamp.

“I just want to clear my name,” he said when asked whether he is open to settling the cases pending against him.

Watson was also asked how he has handled the media attention, including a segment on HBO’s “Real Sports with Bryant Gumbel” and a New York Times article that said Watson met with at least 66 female massage therapists in a period of 17 months.

“Honestly, it’s been tough, making sure I stay balanced with my mental life,” Watson said.

The women suing him allege that the former Houston Texans quarterback committed sexual improprieties during the course of massages. Two grand juries in Texas declined to bring criminal charges against him earlier this year.

While he continues to maintain he did nothing wrong and has no regrets, he said he is sorry for the impact the situation has had on his loved ones and the team.

The Browns acquired Watson from the Texans in a trade in March and gave him $230 million in guaranteed money on a five-year deal.

The NFL continues to investigate and recently wrapped up its interviews with Watson. Despite no criminal charges being filed, the NFL could suspend him for violating the league’s personal conduct standards.

None of the lawsuits against Watson are expected to go to trial until after March 1, 2023. Recent reports said two more women are planning to file suits.

Watson did not play during the 2021 NFL season. In 2020, the three-time Pro Bowl selection led the NFL with 4,823 passing yards and set a career high with 33 touchdown passes and just seven interceptions.