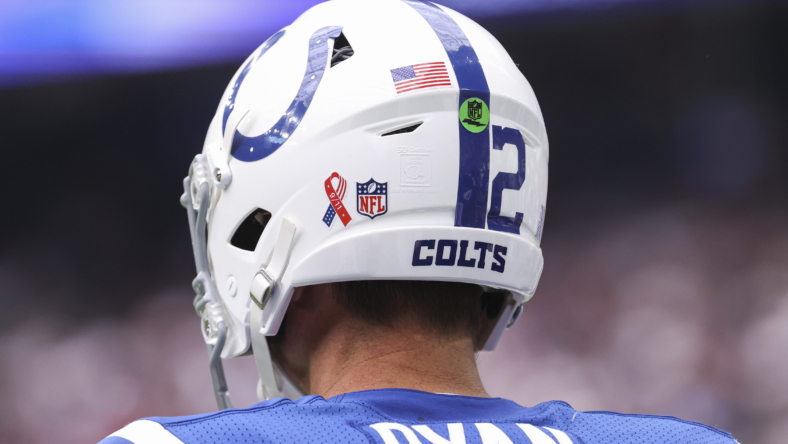 The Indianapolis Colts are being led by a head coach whose decision-making has been questioned too many times. It looks like this season might end up being his last. However, not all blame must be put on Frank Reich. He can only do so much with the talent he is given.

Some of the blame, if not a majority of it, needs to go to general manager Chris Ballard. He is pretty good at finding and evaluating talent. The average career length for an NFL player is 3.3 years. Not counting the ‘21 & ‘22 Colts drafts, Ballard has had 55% of his draft picks last longer than the average. In fact, of 38 total picks Ballard has drafted, 58% of them are still with the Colts.

Which backs up his belief in drafting, developing, and retaining his own talent. And of those 38 picks, 10 of them are starters. So, all this is to say that Ballard is better than most at finding NFL talent. For context, the average GM success rate is 50%. However, as great as Ballard is, he has some critical weaknesses that are clearly on display this season.

Ballard believes that NFL teams are more than just their quarterback. And that the most important area to sink a majority of the team’s resources is in the trenches (besides depth). To be fair, he’s not wrong. If the team can’t control the line of scrimmage, it’s going to be extremely difficult to win games.

He has lived up to his word by making the Colts the highest-paid offensive line in the NFL. Unfortunately, the team has one, maybe two NFL-level tackles on the roster. The rest of the guys profile better as guards or centers.

Prior to the 2020 NFL draft, he traded away the 13th overall draft pick for DeForest Buckner. This offseason, he traded away a young, possibly ascending cornerback for a rotational pass rusher in Yannick Ngakoue.

In 2020, it was all about the defensive line. In the draft, he did a double dip of drafting back-to-back defensive linemen, in Kwity Paye and Dayo Odeyingbo. And he gave extensions to his two starting defensive tackles, Grover Stewart (three-year $30.7 million) and Buckner (four-year $84 million).

This year’s offensive line is on pace to give up 63 sacks. This would be the most during this administration’s tenure. As a result of all of this, the Colts have scored 20 points or fewer in seven straight games during the Reich and Ballard era. This streak is now at seven games, tying the longest Colts streak since 1993.

Ballard has been late to address critical needs

There are three basic things an NFL team needs if it’s going to win games. A franchise left tackle (right tackle if the team has a lefty QB), edge rusher, and quarterback. The Colts currently have maybe one. It’s hard to really judge how good Matt Ryan is when his offensive line is performing so poorly.

To be fair, Ryan does share some of the blame. His 11 fumbles lead the NFL, and he has an additional seven interceptions to accompany them. The last time the Colts had all three of these minimum areas covered was in 2016, when they had Andrew Luck, Anthony Castonzo, and Robert Mathis. That season they went 8-8.

The last time all three of those Colts Ring of Honor guys were healthy was in 2013, when the team went 11-5. That season they won the Wild Card game with the greatest comeback in team history and then lost in the division round to New England, sparking ‘Deflategate.’

Ballard became the Colts’ GM the year after Mathis retired. Yet didn’t address the vacant pass rush need until the third round with Terrell Basham. A couple of names he passed on that have been better are Jonathan Allen and T.J. Watt. Ballard wouldn’t effectively fill this need until 2021.

The left tackle issue is still not solved and possibly the most damning on Ballard’s resume. In 2019, Castonzo toyed with the idea of retirement. The Colts convinced him to return. The saying goes, “if you’re thinking about retirement, then you are retired.” He retired following the 2020 season.

With this in mind, it’s logical to think the Colts would address their need for a franchise left tackle in the 2019 draft. Instead, the Colts didn’t draft an offensive lineman until the seventh round. At this point, it looks like the team might have finally plugged this whole with rookie third-rounder Bernhard Raimann.

Now, for the most damning blemish on Ballard’s resume. In 2019, Luck infamously retired just a few days before the start of the regular season. Since 2018, the Colts have started four different veteran quarterbacks. Only Phillip Rivers was able to take the team to the playoffs. It remains to be seen with Ryan, but at 2-2-1, it’s not off to a good start.

The NFL is a QB-driven league. Every franchise operates with the mindset that unless they have a franchise QB they are in desperate pursuit of getting one. Unless you’re the Colts, then you just try to catch a veteran QB having an elite season. It remains to be seen if Ballard will finally take a legit shot at drafting a franchise quarterback and not just a guy whose ceiling is that of an NFL backup.

To be fair, teams don’t always have to fill their needs with draft picks. They can utilize free agency. In 2019, Ballard was able to convince his former pass rusher, Justin Houston, to join Indianapolis. And in 2021, he recruited yet another former Kansas City player to left tackle, Eric Fisher. Houston would have one great and one average season with the Colts. While Fisher would have an up-and-down year.

Of the quarterbacks that have played in Indy, as previously mentioned, only Rivers took the team to the playoffs. Jacoby Brissett had the best season of his career, although that’s not saying much for a career backup. And a case can be made that Carson Wentz had the best season of his career in Indianapolis. Pro Football Reference gave Wentz an Approximate Value score of 14 in ‘21, compared to 13 in 2017.

All of these players came to the Colts for a relatively cheap cost. Wentz was the most costly of the group. However, Ballard’s frugalness has cost him in other free-agent classes. With that being said, the team that “wins” free agency doesn’t typically have the best regular season. So there is something to be said about Ballard’s plan of action.

However, Ballard being cheap did cost him former Colt, Denico Autry. He subsequently signed with division rival Tennessee for three years and $21.5 million. Seems like that deal is a typical Ballard move. Regardless, it didn’t happen.

Then this offseason, the team has been in need of a veteran wide receiver. They could have brought back long-time favorite T.Y. Hilton. Instead, they kept their youth at receiver. It remains to be seen if this is the correct move or not.

One final thing to look at during his time as the GM is the team’s record. The Colts are 43-42-1. His predecessor’s record was 49-31. Now, everyone will say the difference is who was playing quarterback. This again brings us back to the point that Ballard still has not addressed the most vital position of a football team.

Considering the team’s overall record during his six years, it’s baffling that he got an extension from owner Jim Irsay. Not too many franchises would reward a GM who has only two playoff appearances, a record slightly above .500, and no division titles with an extension.

Yet, this is the state of the organization. And considering the owner rewarded mediocrity, it’s no surprise the team is off to its worst start under this regime, even if the record doesn’t reflect it.

If this season isn’t drastically changed before it ends, then Ballard needs to be shown the door. Apathy is slowly starting to set in with the fans. More and more fans are, in fact, openly admitting to giving away or trying to give away tickets to the game.

Bill Polian, Tony Dungy, and Peyton Manning worked incredibly hard to build this franchise into a winner. I’m sure Irsay doesn’t want to lose his fan base. And if changes aren’t made, then that’s exactly what is going to happen.