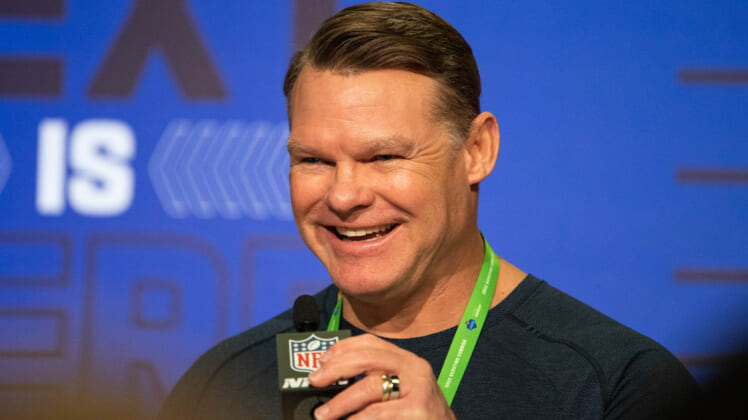 Indianapolis Colts GM Chris Ballard is playing a dangerous game. He’s doubling down on his belief that the rookie and young unproven receivers are going to step up and contribute in a major beneficial way this season. Much like he did last season with the edge rushers.

Last year the Colts went into the season with DeForest Buckner as the main attention getter and pass rusher on the defensive line. The hope was that Kemoko Turay, Tyquan Lewis, and Ben Banogu would step up in the absence of Justin Houston and be impactful consistent edge rushers. They would also be aided by rookies Kwity Paye and Dayo Odeyingbo. Turay, Lewis, and Banogu have been in the NFL for a few seasons and the thinking is that they’d be able to get the job done with Buckner commanding so much attention.

The team also believed that Paye could come in and produce right away and Odeyingbo would help once he got healthy. Well, we all know how it played out. Paye had a good rookie season. Lewis was really coming on until the turf monster attacked his leg against Tennessee. Odeyingbo got some NFL experience and Banogu was nonexistent. This led to a few late-game collapses where the defense couldn’t get off the field on third down. That is unless the distance was 10 yards or more. And even then it was dicey.

So, this offseason, the team remedied the situation by acquiring Yannick Ngakoue from Las Vegas. Ngakoue has been a terror against the Colts. Now, he gets to be a terror for them. This move will have a nice ripple effect on the rest of the D-linemen. Paye will get one-on-one matchups again. Buckner will see fewer double teams and zero triple teams. So, you’d think Ballard would have learned from his mistake last season.

Well, to date, it appears Ballard hasn’t adjusted his mindset. It’s great he believes in the players he scouts and drafts. It’s great that he believes they are all going to be successful and have positive impacts on the team.

However, the Colts’ wide receiver room is Michael Pittman Jr and a bunch of question marks. If we include the tight ends then it looks even worse. The other four wide receivers have combined to catch 27 passes! A quick overview of the pass catchers on the roster.

So how are you feeling about that number two wide receiver and starting tight end for the Colts? MAC has shown flashes of being a legit NFL tight end but he’s never consistently put it together.

Again, Campbell has all the tools to succeed in the NFL. Unfortunately, his health hasn’t been cooperating with him. Might this be the season it all comes together? I’m bullish on it but am also pragmatic enough to know there is nothing that suggests it’ll be any different than previous seasons.

Dulin, Patmon, and Strachan are going to be given an opportunity to show they belong in the NFL and can play. It’s not very often that players are given this kind of opportunity. Coutee has shown he can play in the NFL but that he’s similar to Campbell in health being a detriment.

Granson is now being expected to make more contributions than he did last season. And of course, the rookies are going to be asked to come in and produce like NFL veterans. That’s a big ask from two players who didn’t play at big-time college football programs.

This is why you are constantly seeing Colts fans everywhere talk about the team signing a veteran wide receiver. Someone like T.Y. Hilton makes a lot of sense as the Colts are the only team he knows and he’s familiar with the offense.

Yes, he’s old and injuries have plagued him a little bit more frequently the past few seasons. However, he still knows how to get open, make catches and produce. Last season he was seventh in targets and catches, fourth in yards, and tied for third in touchdowns on the team. Of the players still on the roster from last season to this season only MAC and MPJ were better.

The Colts shouldn’t want to repeat 2018’s history where they are desperately looking for a wide receiver and get fortunate enough to bring in 29-year-old Dontrelle Inman. The team should be pragmatic and proactive and bring in a veteran wide receiver now. Again, Hilton makes the most sense.

Julio Jones just signed with Tampa Bay and Odell Beckham Jr is still recovering/rehabbing from his injury in last season’s playoffs. Plus OBJ would need time to get acclimated to the Colts’ offense. Whereas Hilton just needs to get the timing down with his fifth different quarterback in the past four seasons.

For all the great things that Ballard does and has done, his stubbornness sometimes gets the best of him. It would make a lot of sense for the team to add a veteran wide receiver now and be in better shape for the upcoming season. Plus it’d get the local media guys off his back about always talking about needing to add a wide receiver to the team.

Related: Indianapolis Colts rise, fall, and a possible return to title contention in 2022