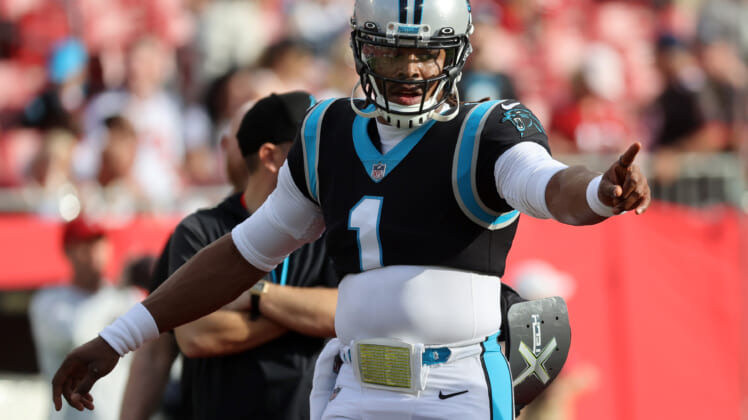 From a couple longtime starting left tackles to a former NFL MVP, we’re expecting some of these 10 players to sign soon. Here’s a look at said players and their best potential landing spots.

A former first-round pick of the Patriots back in 2011, Solder performed at a high level in New England for seven seasons. He ultimately signed a whopping four-year, $62 million deal with the New York Giants ahead of the 2018 season. Things didn’t go swimmingly for Solder in four seasons with the team. That included opting out of the 2020 campaign due to COVID.

Solder, 34, has started 16 games in each of the past four seasons he’s played. He can be a good right tackle or swing tackle option. That’s where the Raiders come into play. Right now, they are slated to start either stuggling youngster Alex Leatherwood or Brandon Parker at right tackle. That’s a less-than-ideal scenario in front of the recently-extended Derek Carr. Vegas’ new brass also has a built-in relationship with Solder dating back to his Patriots days.

After earning a Pro Bowl spot with the Buccaneers in 2020, Pierre-Paul put up a career-worst performance with 2.5 sacks this past season. He’s 33 years old and no longer the same player that saw him earn consecutive Pro Bowl appearances earlier in his career with the Giants. However, there’s certainly a track record of success.

Why not return to Jersey to end his career? The Giants have a need out on the edge and would certainly welcome JPP back. It almost makes too much sense.

At one point earlier in his career, Fuller was considered a major deep threat. The former Notre Dame standout is still averaging nearly 15 yards per catch since he entered the NFL back in 2016. Unfortunately, injuries have caught up to him. Fuller missed all but two games in his first (and only season) with the Miami Dolphins with a broken thumb.

This performance came with Fuller catching passes from new Cleveland Browns quarterback Deshaun Watson when they were teammates in Houston. There’s an obvious connection here. Cleveland also has a need at wide receiver behind the recently-acquired Amari Cooper. This seems to be a match made in heaven.

Once one of the better interior pass rushers in the game, Suh has taken a step back in recent seasons. Last year with the Buccaneers, the five-time Pro Bowler did return to form some by registering 13 quarterback hits and six sacks. It’s led to him drawing interest from the Cleveland Browns and Las Vegas Raiders, among other teams.

We’re hear to say that Vegas makes the most sense. It has a pair of elite edge rushers in Patrick Graham’s defense in the form of Maxx Crosby and Chandler Jones. Adding someone like Suh to the mix would give these Raiders one of the best defensive lines in the NFL.

From 2012-21 with the Houston Texans and Seattle Seahawks, Brown earned a whopping six Pro Bowl appearances. Even in his Age-36 season in 2021, Brown was able to make a trip to the NFL’s version of the All-Star Game. Despite this, Seattle opted not to retain the veteran in free agency.

Enter into the equation a Packers team that might end up having a need at tackle. All-Pro David Bakhtiari missed all but one game during the 2021 season after suffering a torn ACL the previous year. He’s been slow to recover and had to undergo an off-season procedure.

Barr, 30, is an interesting case study in that the former UCLA standout has earned four Pro Bowl trips throughout his eight-year NFL career. For some reason, he remains a free agent with training camps having started around the league. Perhaps, teams are simply seeing a regression from the veteran. However, the numbers tell us a different story.

Barr has been linked to both the Washington Commanders and Dallas Cowboys in the NFC East. However, Denver seems to be just as good of a fit. Josey Jewell and Jonas Griffith are slated to be its top inside linebackers this season. Jewell played in just two games last season and has been a disaster in coverage (104.5 QB rating allowed in his career). Barr would be a marked upgrade for the Super Bowl contenders.

An embattled figure last season due to some off-field controversy, Beasley found himself released by the Bills after three years. On the field, he’s proven to be among the most-consistent slot receivers in the game. That’s not hyperbole.

Beasley’s former Cowboys team traded Amari Cooper and lost Cedrick Wilson in free agency. Meanwhile, Michael Gallup is slated to miss Week 1 as he recovers from injury. Bringing Beasley back to Big D after a three-year hiatus makes a ton of sense.

Having already starred for the Cleveland Browns and Pittsburgh Steelers in the AFC North, Haden might want to think about making it a trifecta. Despite earning a trip to the Super Bowl last season, Cincinnati has issues at cornerback. Any time someone like Eli Apple is a top-three player at that position, trouble is abound.

A three-time Pro Bowl performer, the 33-year-old Haden fell off the map last season with Pittsburgh (100.1 QB rating allowed). However, he was still playing at a high level as recent as the 2020 campaign (75.9 QB rating allowed). Cincinnati should take a swing and see if he’s able to return to form.

Let’s be clear here. OBJ will not be ready to make an impact until late in the season after suffering a torn ACL in the Super Bowl this past February. That’s the only reason he remains unsigned. It also means only legitimate Super Bowl contenders would even have interest in him.

Enter into the equation a Titans squad that traded A.J. Brown in a cost-cutting move during the 2022 NFL Draft. It needs more proven weapons for a regressed Ryan Tannehill on offense. Short of that, Tennessee will be relying too much on running back Derrick Henry. Beckham Jr. would be a nice addition for late in the season.

Cam Newton still believes he’s an NFL player after struggles the past two seasons with the New England Patriots and Carolina Panthers. It’s just not going to be as a starting quarterback. That’s the harsh reality of the situation for the former NFL MVP.

Despite these struggles, Newton could still be considered a solid backup quarterback in the right situation. That very same two-year span has seen him register 17 touchdowns on the ground. San Francisco might very well be in need of a backup for Trey Lance once it either trades or releases Jimmy Garoppolo. In this scenario, Newton would be the best fit given his experience and play style.