NFL free agency has been in full swing for several weeks, yet five-time Pro Bowler Ndamukong Suh is still available on the open market.

There is a strong possibility he could return to the Tampa Bay Buccaneers for a fourth season and pursue a second NFL championship with that team. On Tuesday, Bucs General Manager Jason Licht was asked about the latest with Suh, and he explained that re-signing him is an option in play.

“Still in touch, still talk,” Licht told the Tampa Bay Times. “Got a lot of . . . balls in the air, a lot of decisions that we have to make here moving forward for different reasons. . . . It’s an open door for a lot of different things that can come up, but we’ll see what happens.”

At 35, Suh is seemingly on the back nine of his playing career. However, that doesn’t mean he can’t be a contributor to a winning team like he’s been in Tampa the last two seasons, or a veteran presence to help boost a rebuilding franchise. With that in mind, here are three possible landing spots if Suh doesn’t return to the Buccaneers in 2022.

Suh would be a worthwhile addition to any franchise, even with 12 seasons of wear and tear on his body. However, he would likely be best as a veteran with a reputation that can help elevate teammates on the rise. He could certainly do that with the Indianapolis Colts.

The Colts’ front four already has some solid pieces in DeForest Buckner and Yannick Ngakoue. Adding Suh to the team’s 4-3 defense would allow Buckner and Ngakoue even more opportunities to rack up sacks and wrangle more tackles. Until he retires, Suh is a player that offenses will always have to scheme for. Making life a little easier for his fellow lineman.

Plus, the team upgraded at quarterback by acquiring Matt Ryan and still have $21 million in cap space to further improve an organization that can contend for the AFC West this season. Some of that money should go to Suh and help to make the defense even more formidable for a serious playoff run.

The expectations for the Carolina Panthers in 2022 are one of the lowest in the league. Suh taking his talents to the Silver-and-Blue would not be about trying to contend for division titles and playoff berths. Instead, this would be a chance to cash in with one last worthwhile contract before he calls it a career in the next few seasons.

With over $31 million still available in cap space, the Panthers are likely to spend some of that soon on the plethora of holes they still have. Adding a proven, former All-Pro with a Super Bowl ring would be a smart move in their attempts to improve the defense and rebuild a winning culture in Carolina.

Cleveland Browns defensive end Myles Garrett is one of the best pass rushers alive. He proved that point again in 2021 when he collected QB heads to the tune of 16 sacks. The current Browns defensive front offers little in terms of taking the pass rush load and stress off of the team’s top defensive player. 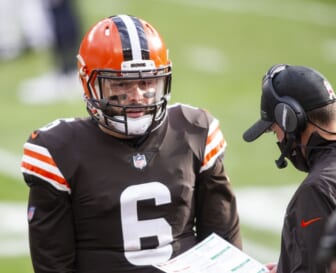 However, adding the 6-foot-4, 313-pound Suh to the equation would be a monumental upgrade just on reputation alone. The team already made a massive splash in acquiring Deshaun Watson. Making a mid-level splash in improving the D-line with a respected name makes all the sense in the world considering the issues they have on that side of the ball.