Back to the Future: How the Indianapolis Colts could create a legacy team 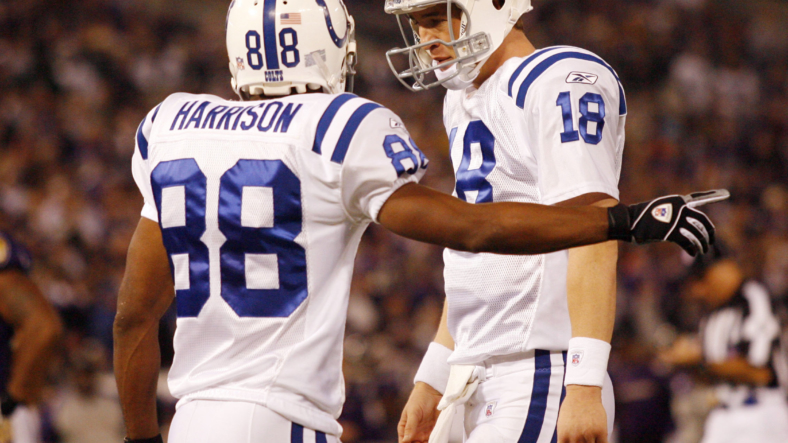 The Indianapolis Colts have had some truly special players on their roster over the course of the franchise’s existence. Even going back to their days in Baltimore. The Colts have retired nine jersey numbers, been to four Super Bowls, and won two of them. However, they have won four championships in total, as they were back-to-back champions in 1958 and 1959 when the franchise was in Baltimore prior to the AFL-NFL merger.

The franchise’s best run of success came with Peyton Manning, Marvin Harrison, Edgerrin James, Reggie, Wayne, Dallas Clark, Tarik Glenn, Jeff Saturday, Ryan Diem, Dwight Freeney, and Robert Mathis leading the way. They were perennial playoff teams and dominated the AFC South. More recently, the franchise has fallen into some more troubling and difficult times compared to its heyday. However, there is a strong possibility of the Colts getting some legacy players in the near future.

Colts get their first legacy player in Marvin Harrison Jr.

Marvin Harrison put together a Hall of Fame career filled with many incredible, jaw-dropping plays with the Colts. Now his son, Marvin Harrison Jr. (MHJ), is playing college ball at Ohio State, where he is one of the team’s starting wide receivers. The younger Harrison checks in at 6-foot 3-inches and 204 pounds which is three inches taller and nearly 20 pounds heavier than his father.

In reading his high school scouting report, he drew some similar comparisons to his dad. For example, “So smooth he makes it look effortless. Needs to add strength to handle jams and become a more effective blocker” and “Great route tactician.” However, that is where the comparisons end. As of right now, MHJ is projected to be a day-three draft pick going somewhere in rounds 4-7 and drawing comparisons to a quicker Kenny Golladay.

However, the 4-star player is a sophomore and still has time to develop his game even further. It’s possible he enters the NFL draft after the 2024 season after his junior year. If he stays out of the first round, then he’s sure to have the attention of Chris Ballard whose track record suggests he only picks wide receivers in the second round or later.

Related: Re-signing Jonathan Taylor could prove to be a massive gamble for Indianapolis Colts

The next legacy player is the one that will be the absolute hardest to acquire. Namely, Peyton and Eli Manning’s nephew and the grandson of Archie Manning. We, of course, are talking about Arch Manning, the son of Cooper Manning.

Arch is currently enjoying his senior year of high school, and he’s already committed to playing football next year at the University of Texas. Now, it’s possible that he redshirts his first year as current starter Quinn Ewers AKA Joe Dirt will still be there. Redshirting would allow more time for Manning to get familiar with the offense while also getting bigger and stronger.

Or he could just start from Day 1. After all, he does have Manning bloodlines coursing through his veins. Current head coach Steve Sarkisian does operate a more QB-friendly offense. Compared to former head coach Tom Herman who ran a “kill the QB” type offense. Herman’s offense just allowed for a lot more shots to be taken on his QB than most coaches would like.

Manning is listed at 6-foot 4-inches and 215 pounds. This five-star recruit is being touted as the next best thing. Some are already projecting him to be similar to his Uncle Peyton in going first overall. It makes a ton of sense as Arch has good size for an NFL QB and possesses all the necessary tools. Unlike both of his uncles, he does have the mobility that opponents need to be concerned with.

Can the Colts actually get both legacy players?

Alright, if the Colts getting MHJ is very possible, then getting Arch is the exact opposite. Manning’s first opportunity to enter the NFL draft will be in 2026. Current Colts starter Matt Ryan is under contract for this season and next. Depending on how well he plays and how his body feels, it’s possible that he could be the starter for another couple of seasons.

How it could possibly play out

It most likely means Ballard will need to part ways with his highly coveted draft picks and probably some impact-important players. One player that comes to mind would be Michael Pittman Jr. Stay with me here as we’re going to go on a little journey. MPJ is looking every bit of a number-one wide receiver in the NFL. The Colts just drafted Alec Pierce, who is listed as the starter opposite him.

Pierce is on his rookie four-year deal, which means he won’t be a free agent until 2026. MPJ’s current rookie deal is up after the 2023 season, making him a free agent in 2024. We just saw during this past offseason that not every NFL team wants to pay big money to their wide receivers. The Colts still have Parris Campbell, who they are hoping has a great season.

According to our friends at Spotrac, they are projecting MPJ to get a three-year $41.2 million deal that comes with an annual average amount of $13.7 million. This deal may be too rich for Ballard’s liking. Especially with Pierce and (maybe) Marvin Harrison Jr. on the roster. If other current wide receivers have success, like Ashton Dulin, Dezmon Patmon, or Mike Strachan, then it can justify even more the need to not pay MPJ and trade him.

Pittman would fetch a nice return. If A.J. Brown and Marquise Brown can each get a first-round pick and an additional pick, that should be the floor of the return for Pittman if he can continue to step up his game. There’s also a possibility that the Colts use a franchise tag on Pittman. It depends on what Ballard does with Quenton Nelson, Jonathan Taylor, and possibly Matt Ryan’s contract. There is only so much money to go around.

Related: Lack of Quenton Nelson extension providing cause for concern for Indianapolis Colts

So, let’s say the Colts trade Pittman and get back a 2026 first and second-round draft pick. They then use these two picks, plus include their 2026 and 2027 first-round picks, and their 2026 second-round pick. That would be a total of five draft picks and essentially Pittman to move up and get Arch.

Now, with this hypothetical, it’s hard to really know where the Colts will be drafting in 2026 and who even would be the team bad enough to have the first-overall selection. Some possible teams are Tampa Bay (Tom Brady has to retire sometime), NY Jets (they’re always looking for a franchise QB), the Rams (with all the draft capital they’ve traded away over the years to get their Super Bowl, they might actually want a lot of draft picks in return to quickly appease their fan base) and of course, Detroit and the NY Giants (they’re a little bit better at getting franchise QBs than the Jets).

There is also one more hurdle to be cleared, and this may be the biggest one of all. Uncle Peyton Manning’s approval. Let’s not forget that the Manning family told the then-San Diego Chargers not to draft Eli as they didn’t want the brothers consistently facing and being compared to each other. San Diego drafted Eli anyways and then traded him to the Giants. It’s possible that Peyton wouldn’t want his nephew to play for his former team as well.

Arch would consistently be compared to his uncle, and what happens if Arch breaks Peyton’s Colts records? We know Peyton wants some rookie QB to break the rookie interception record, but we’re not so sure he wants any of his other records broken. Let alone have his nephew be the one to break them.

If Ballard is able to get the Manning family’s blessing and work his magic to move up and draft Arch then Ballard’s reputation would only grow that much larger. It would also be incredibly cool to see Harrison (Jr) and Manning on the back of Colts jerseys once again. If that dream scenario isn’t cool enough, T.Y. Hilton’s son could possibly be on the way too. He’s currently a sophomore at Zionsville high school and the 6th best wide receiver in the state of Indiana. We’ll just have to follow his career and see where it leads him.