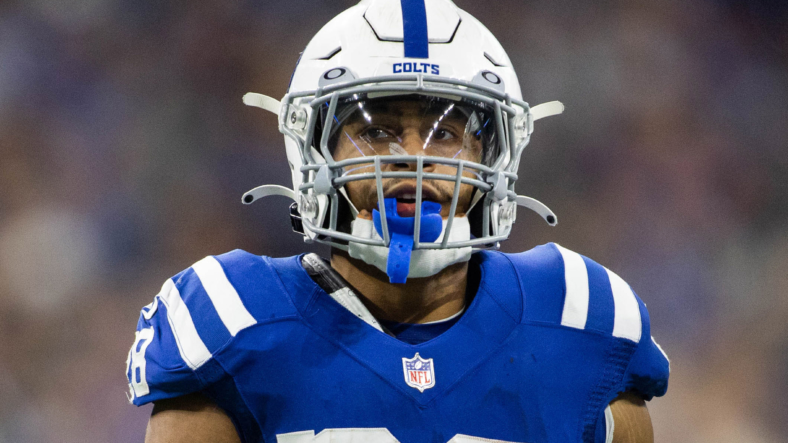 The Indianapolis Colts have the best running back in the AFC and arguably the best running back in the NFL. The second-round selection of Jonathan Taylor by general manager Chris Ballard has been a home run for the team. He’s coming off the best season of his career. Setting career highs while also leading the league in carries (332), yards (1,811), touchdowns (18), rushing yards per game (106.5), and yards from scrimmage (2,171).

His performance culminated in him winning the Offensive Player of the Year and earning his first Pro Bowl and All-Pro selections. Now, what does he do for an encore? It better be something great as he’s set to be a free agent in 2024. Signing him to an extension seems like a no-brainer. Or does it? There are some alarming concerns from previous running backs who got big paydays.

What can the Colts take away from all of this?

Well, in looking at the stats from these players, every running back, except for CMC and Zeke, had great first years in their new extension. Subsequently, all of these tailbacks have seen their productivity decline over the course of the extension. Which, in the case of Zeke and Henry, have led to wear and tear concerns.

We can also see that if the running back plays in a division with a Hall of Fame quarterback, their teams haven’t had great success; Cook and CMC. Since 2020, only Tennessee has been consistently in the top five of rushing yards, despite the aforementioned concerns about Henry.

These teams combined have gone 95-86 in the regular season. We can also see that these teams have combined to make the playoffs just four times! With half of those appearances coming from Tennessee. However, these teams’ success has been dismal, with a combined playoff record of 1-4. New Orleans won the only playoff game, which was also in Brees’ final season.

According to Spotrac, they’re expecting Jonathan Taylor to sign a four-year, $65 million deal with an average yearly salary of $16.3 million. This would make him the third highest-paid running back. And the highest annual average amount, besting CMC’s $16 million.

Taylor is currently 23 years old and won’t turn 24 until January 19th. He’d be 25 at the time of the signing of his next contract. And if the length of the contract holds true then he’d be 30 at the end of the deal. This would fall directly in line with the previously listed group of running backs.

So, is he really worth tying up so much money in?

If the projected financial amount from Spotrac is accurate (they are usually close), then JT would be the second highest-paid player and account for about 8% of the Colts’ total salary cap. This could all change if the team gets a contract extension done with Quenton Nelson. Kind of crazy that the team has stated “they want to draft, develop, and then retain their own” and that Q’s “special” but no deal is in place as of this writing.

But we’re getting away from the topic of whether it’s smart to keep Taylor or not. If the Colts decide to extend him, they could be planning to follow a similar path to Seattle. Back when they had the Legion of Boom and Marshawn “Beast Mode” Lynch.

That team had all the pieces in place before landing their franchise quarterback. This led that franchise to perennial playoff appearances, two Super Bowl trips, and one hoisting of the Lombardi Trophy. It’s not a bad formula to follow, and it’s easy to draw comparisons between that team and what Ballard is building.

However, as we saw with the current top-paid running backs, there hasn’t been a lot of overall playoff success. Regular season success, yes. But it’s all about the playoffs and Super Bowls. Something that has eluded this team under its current regime. Add in the fact that the running back position has been increasingly devalued and that the NFL has shifted to being more of a passing league.

Four out of the last six teams to be in the Super Bowl were all in the top five in passing yards in the NFL. Last season’s Los Angeles Rams were fifth. In 202,0 Kansas City and Tampa Bay were first and second, respectively. And in 2019, Kansas City was fifth.

Only San Francisco in 2019, which was second in rushing, made it to the Super Bowl. All four of the listed passing first teams ranked outside of the top 10 in rushing yards. The need for a bell cow running back in order to succeed in the NFL is dead and gone.

Can Taylor be the exception to the rule?

Taylor is a special player. In chatting with other NFL minds, we asked their thoughts on whether the Colts should keep him. Some of the responses received were, “Is this a serious question?” and “Yeah, I think so since they want to keep their own.” A couple of the other ones were “No, running backs have a short shelf life” and “Running back is always a position you can reload.”

So, as you can see, it’s about a 50/50 split on the matter. The Colts won’t extend him this year. As they’ve never negotiated a contract extension two years before the current contract is up. So, that means next season is the earliest an extension could be reached.

This season will play an important part in those negotiations. The team should also consider the possibility of trading him away in order to get some future first-round draft picks. The hope is that one of those future picks ends up in the top 10 of the draft so the team can draft its future franchise quarterback.

As previously stated, it’s a passing league nowadays. Fans are being reminded that their team just needs a serviceable and reliable running game, not a dominant one. With that being said, the Colts should extend Taylor. As it’s not hard to envision him being the exception to the rule. Also, he’s more valuable to the team than any other player not named Matt Ryan.

Related: 4 Indianapolis Colts players who could disappoint in 2022