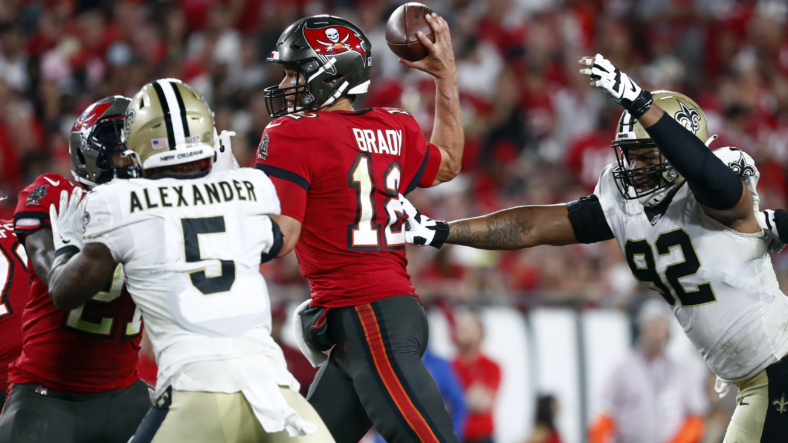 NFL Week 2 has arrived and while the slate of action on Sunday and Monday might not seem as exciting compared to last week’s action, there are plenty of games that football fans will enjoy. Best of all, surprises will make it even better.

Unexpected things happen every Sunday. No one anticipated the Chicago Bears defeating the San Francisco 49ers in the season opener. It wasn’t the only stunner on the slate with the Seattle Seahawks and Pittsburgh Steelers pulling off upsets.

As we look at the games ahead, there are still a few opportunities for some real surprises. We could also witness some important moments that will define the 2022 NFL season.

Let’s dive into our bold predictions for NFL Week 2.

The Pittsburgh Steelers nearly lost to the Cincinnati Bengals in Week 1 because of Mitchell Trubisky. On a day when the defense generated five takeaways, Trubisky somehow found a way to keep the Bengals in the game. He ranked 30th in yards per attempt (5.1), completing 21-of-38 attempts to reach 194 yards.

It felt reminiscent of the Steelers’ offense with Ben Roethlisberger. Pittsburgh got the football out within seconds of the snap, asking Trubisky to make the quick throw. It was made worse because Trubisky’s passes didn’t allow his receivers to make plays after the catch.

We wouldn’t necessarily advise the Steelers to start Kenny Pickett against Bill Belichick, we know the history of rookies against the New England Patriots. However, Pickett is the more talented quarterback and he proved in the preseason that he is more NFL-ready than expected. If Trubisky can’t get it done before halftime, we’re eyeing a quarterback change.

The New Orleans Saints have some ownage over Tom Brady in recent years. With the Tampa Bay Buccaneers playing in front of a hostile crowd, an offense without Chris Godwin and thin on the interior defensive line would seemingly be at a massive disadvantage. Yet, this matchup feels different.

Look at what happened to the Dallas Cowboys on “Sunday Night Football” In Week 1. Tampa Bay generated a 34.8% pressure rate, recording four sacks and creating havoc with 15 blitzes. On Sunday afternoon, they face a Saints’ offensive line that looks more like a turnstile on the left side.

New Orleans also just surrendered 200 rushing yards to the Atlanta Falcons and it now encounters a more physical rushing attack with a quarterback it must respect. Even if Brady doesn’t have a great performance, this still feels like a game the Buccaneers defense can take over and it results in a two-score win and a 2-0 start.

The Indianapolis Colts remain the favorites to win the AFC South, but this doesn’t look like the team everyone expected. After fighting for its life to get a tie against the Houston Texans, Indianapolis must now travel without Shaquille Leonard, Michael Pittman Jr and Alex Pierce to Jacksonville.

Everyone knows Florida is not a place the Colts are comfortable playing in, it seems to be their kryptonite. It might be even more challenging now than in previous seasons. The Jaguars’ pass rush is significantly improved and it can attack left tackle Matt Pryor, putting pressure on Matt Ryan.

Under duress with Parris Campbell as his No. 1 receiver, the Colts’ offense could become one-dimensional with its dependence on Jonathan Taylor. All of that sets up for a script that could lead to Jacksonville taking down its division rival once more.

When the NFL season began, many projections put the Philadelphia Eagles atop the NFC East with the Dallas Cowboys in second. Everyone agreed it would be a two-team race for the division crown, all while the New York Giants and Washington Commanders battled for draft position. Soon, both teams could be 2-0 on the season.

Washington isn’t favored on the road against the Detroit Lions, but it matches up favorably. The Commanders, even without Chase Young, have the talent up front to attack an injury-depleted Lions’ offensive line. Washington’s cast of offensive weapons is also too versatile and talented for Detroit’s secondary. All of that means, if Carson Wentz plays well, that the Commanders can start 2-0.

New York also has a nice advantage over the Carolina Panthers. We just saw the Cleveland Browns run through Carolina last Sunday, gaining every yard its running backs wanted. Based on how Saquon Barkley looked, there’s no reason to think he can’t carry the Giants to another victory.

After opening the season with a dominant showing in the NFL Kickoff game, the Buffalo Bills return to the national stage on “Monday Night Football” against the Tennessee Titans. While many still held the Titans in high regard entering the season, it’s evident this is a team transitioning to a rebuild.

We’re poised to witness a blowout in one of the final NFL Week 2 games. Tennessee’s pass rush isn’t nearly as effective as the group we saw in 2021, the absence of Harold Landry hangs over the team. If the Titans can’t pressure Josh Allen without blitzing, taking defenders out of coverage to go after him will only make the vulnerabilities in this defense worse.

Of course, Allen will pick this secondary apart if he operates from a clean pocket. In either scenario, this will be an opportunity for the Bills to drop 40 points.