The feud between quarterback Kyler Murray and the Arizona Cardinals seems to be over. Following several weeks of trade speculation and suggestions the NFL star could switch to baseball, all seems right in Arizona once again.

It’s the end of a cycle that saw Murray wipe any references to the team off his social media and the franchise seemingly leak that its quarterback is ‘self-centered and immature‘.

Jane Slater of NFL Network reports the drama between Murray and the Cardinals has subsided, with sources on both sides indicating “everything is copacetic” and everyone is on the same page moving forward. 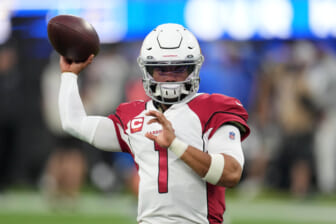 Furthermore, per Slater’s reporting, Arizona now intends to explore a long-term future with Murray. While the immediate move would be exercising his fifth-year option, locking in a fully-guaranteed salary for 2023, a contract extension is also something the organization wants to get done.

Looking at the highest-paid quarterbacks in the NFL, a long-term deal will certainly be costly. While Murray has struggled in some big moments, especially late in the year, he is already a Pro Bowl quarterback with an even higher ceiling.

Realistically, any contract offer to Murray likely needs to start at $40 million per season. It would put him in line with Deshaun Watson and Josh Allen, two quarterbacks who turned their potential into elite play.

Arizona likely can’t afford to be too patient about pursuing an extension. NFL revenue is skyrocketing, bringing the salary cap up along with it. If Murray keeps playing well and he doesn’t receive a long-term deal this offseason, it might cost Arizona $45 million per season to sign him in 2023.