The Arizona Cardinals have seen the pettiness of Kyler Murray‘s actions on social media and have raised the stakes, by joining in on the fun themselves. Recently, the team’s official Instagram account mirrored Murray in a way, by erasing who knows how many posts they previously had up.

Now the only two that stand are pictures of Murray.

Interestingly, one is of the day they drafted him, with Murray holding up his No. 1 jersey proudly with a Cards cap on his head. The only other post left on their Instagram is another of Murray, this time showing him at the 2022 Pro Bowl.

It’s a bizarre and sudden change.

Are the Arizona Cardinals hinting at something?

Are they insinuating they made Murray what he is today? The Cardinals made the bold choice to select him No. 1 overall back in the 2019 NFL Draft when they already had a potential future quarterback with Josh Rosen who they selected 10th overall just a year earlier.

Their plan was to pair him with Kliff Kingsbury in the hopes they could bring the organization their first-ever Super Bowl, but lately, some internal issues may be rearing their ugly head.

Obviously, it hasn’t quite worked out to their advantage yet, but at the same time, they’ve come a long way. From 5-10 in their first season to now going 11-6, reaching the playoffs after at one point having the best record in the NFL isn’t a bad jump. Sure, it may have ended badly in the playoffs, but there’s still a lot of hope for the future with Murray at the helm.

And it’s not like Josh Rosen has done anything since either. While there are some inconsistency issues to continue to work on, Murray has performed as a Pro Bowl quarterback.

Even pending free agent receiver Cristian Kirk recently alluded to the possibility of Murray and the franchise choosing to go their separate ways this offseason.

Murray is entering the second to last year of his contract and the last before his fifth-year option kicks in. K1 is likely expecting a massive extension this offseason, but maybe the team has some reservations about paying him bookoo bucks for whatever reason. Which might be the ultimate reason for whatever we’re seeing transpire on social media. 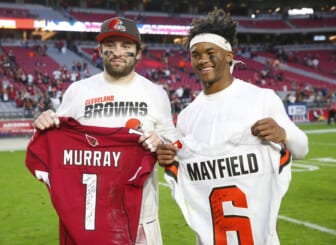