NFL insider predicts where Aaron Rodgers will play in 2021

NFL rumors are swirling around Green Bay Packers quarterback Aaron Rodgers, especially after the reigning NFL MVP was critical of the franchise in a recent interview. But as rival clubs try to come up with a way to land the future Hall of Famers, Rodgers’ future in Green Bay remains uncertain.

The Packers want their 37-year-old quarterback to return for the 2021 season, with general manager Brian Gutekunst and team president Mark Murphy both stating their desire for his return. But Rodgers’ issues are largely tied to those men and a distrust in a front office that has seemingly devalued the face of its franchise.

Rodgers, who asked for a trade this spring, is skipping voluntary camp for the first time. While it’s not a major cause for concern, there’s an increased likelihood he doesn’t show up for mandatory minicamp and he could stay away for the summer to create leverage.

The possibility of holding out of training camp and the preseason has led many to believe Rodgers isn’t returning, but taking such drastic action would also be costly.

For weeks, many reporters have hinted that a return is unlikely. Instead, a majority of NFL insiders and league executives have suggested Rodgers either retires or Green Bay caves by trading him. But the consensus seems to be shifting.

Rodgers’ close friends and former teammates hinted that a return was possible, if Green Bay offered a contract extension and made promises to be more aggressive. More recently, a Packers’ beat writer weighed in on the quarterback’s future , suggesting he would more than likely take the field in Week 1 against the New Orleans Saints.

Now, a top NFL insider is making a surprising prediction for how things play out between Rodgers and the Packers.

What team will Aaron Rodgers play for in 2021?

Yahoo Sports’ Charles Robinson, one of the first to report Rodgers’ issues with Green Bay were tied to Gutekunst and not Jordan Love, believes a resolution is possible. While one of the league’s best reporters thinks it will take time, Robinson predicts that Green Bay eventually signs Rodgers to a contract extension.

Ultimately, a long-term deal might be the biggest thing Rodgers wanted. After winning his third NFL MVP award, he approached Green Bay’s front office about a long-term deal. The current terms of his contract give the Packers flexibility to move on from him next offseason, making Love the starter, something he wants to change.

Green Bay initially turned down his request for a contract extension, instead offering a restructured contract that would only guarantee he remains through the 2021 season. As a result, after long holding a desire to finish his career in Green Bay, Rodgers wanted out. 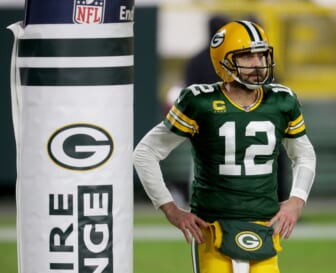 The two sides have since discussed a new contract, but there’s a lot of work to be done. Rodgers doesn’t have confidence in Gutekunst or Murphy, believing Green Bay’s general manager is wasting a Super Bowl window and the quarterback believes the franchise doesn’t place enough value on its players.

Stepping away from the NFL would do irreversible damage to Rodgers’ legacy. Likewise, an ugly divorce with arguably the best player in franchise history would sour how players and coaches view the Packers. Ultimately, given everything at stake for both sides, a resolution is possible.