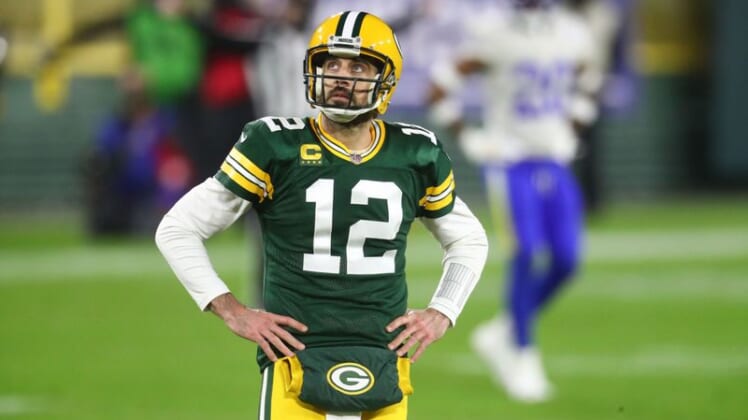 The reigning NFL MVP made it known on Day 1 of the 2021 NFL Draft that he didn’t want to return to Green Bay this coming season. NFL Network’s Ian Rapoport captured Murphy’s comments on Rodgers and the first round of the draft:

Murphy obviously defends the strategy to select Georgia cornerback Eric Stokes with the 29th overall pick, and reaffirmed the organization’s commitment to Rodgers.

Drafting Stokes was actually a good-faith move by the Packers, considering their No. 2 cornerback from last year, Kevin King, got torched in an NFC Championship Game loss to the eventual Super Bowl champion Tampa Bay Buccaneers. The hope is Stokes can be an immediate upgrade.

On the other hand, Stokes isn’t the best scheme fit for Green Bay, and once again, getting another weapon for Rodgers in the passing game wasn’t a big priority.

Murphy and the Packers front office are embarrassing themselves at this point. They need to read the room and understand that Rodgers obviously wants out, and keeping him around does nobody any good.

Trading up to draft Jordan Love in Round 1 last year without telling Rodgers beforehand was bad enough. This is an organization that doesn’t play to win, but rather plays not to lose, and that’s not what you see the top franchises in the modern NFL doing.

For Green Bay to win only one Super Bowl apiece with Brett Favre and Rodgers across multiple decades is frankly pathetic. Love has absolutely gigantic shoes to fill once he steps into the starting lineup, and it’d behoove the Packers to help him out with more top-flight weapons. It’s also alarming that No. 1 wideout Davante Adams hits free agency in 2022, by the way.

The writing is on the wall. Rodgers, despite his advanced football age, is showing no signs of slowing down. It’d be a shame if the Packers essentially held his career hostage, forced him into retirement, and denied him a legitimate chance at a second Super Bowl.

Rodgers can still net huge trade value for Green Bay, who loves to hoard draft picks. It’s a dream scenario. The Las Vegas Raiders and Denver Broncos are odds-on favorites to trade for Rodgers, even as the Packers continue living in denial that a trade will ever happen.

A breakup is inevitable. Let Rodgers go, Green Bay. He’s carried the franchise on his back for long enough. Now it’s time to let him thrive in the twilight of his Hall of Fame career and hoist a Lombardi Trophy to cement his legacy.