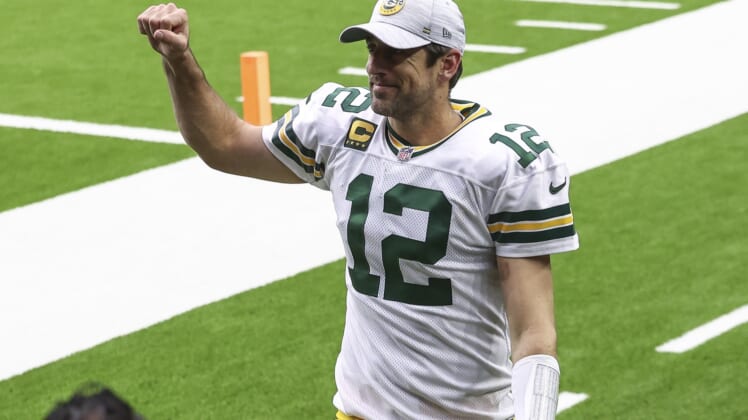 Green Bay Packers quarterback Aaron Rodgers might have played his final snap for the only NFL franchise he’s ever known, barring an unprecedented move that would change the power structure of the NFL for years to come.

Shortly after Green Bay’s loss in the NFC Championship Game, Rodgers openly pondered his uncertain future with the organization and then cast greater doubt on it in April. Less than a year after Green Bay shocked the NFL world by trading up to draft Jordan Love, a move that drew criticism from general managers and scouts, a deteriorating relationship worsened.

Then, hours before the 2021 NFL Draft, ESPN’s Adam Schefter reported the reigning NFL MVP wanted out of Green Bay and was fed up with the front office. Now, as the Packers conclude their draft, it’s becoming quite evident just how bad things are between the two sides.

Rodgers, who reportedly told teammates he isn’t coming back, asked for a contract extension after the playoffs concluded. Instead, per NFL Network’s Ian Rapoport, Green Bay offered to restructure his deal. It would give the organization more cap space to spend this offseason, but wouldn’t be a long-term commitment to the future Hall of Fame quarterback.

After that, Rodgers’ feelings toward the front office were seemingly reaffirmed. With the franchise unwilling to make the long-term commitment that he wanted, talks between the two sides broke off. As Rodgers started pulling away, CEO Mark Murphy, general manager Brian Gutekunst and head coach Matt LaFleur all met privately with the franchise’s star. Unfortunately for Green Bay, the damage was already done and it might be too late to salvage it.

Will Aaron Rodgers return to the Packers?

While the 37-year-old is locked into a contract with Green Bay, he does have the option to retire. It’s under consideration, but stepping away from the NFL would come with financial ramifications. Rodgers would owe the franchise more than $20 million to repay part of his signing bonus.

Despite the high cost, it seems to be on the table. Rodgers has made more than $240 million in career earnings on his contracts alone, per Spotrac. He bought a $28 million Malibu home in 2019 and has seemingly saved much of the money earned during his NFL career. Of course, this doesn’t even account for income received through endorsements.

If he wanted to step away from football, there would be no shortage of opportunities for him. While he received mixed reviews from his two-week run as the Jeopardy! host, he is seemingly in the running for the full-time gig. Even if he didn’t land that, networks would love to hire him as a game analyst.

Mark Murphy announced Saturday that Rodgers won’t be traded, backing up the statement made by Gutekunst. While the organization is attempting to restore trust with the All-Pro quarterback, the chances of a return are slim.

ESPN’s Rob Demovsky, who covers the team, said Saturday he believes there is less than a 5% chance Rodgers plays another snap for the Packers.

Green Bay is reportedly now willing to sign Rodgers to a contract extension, but that’s no longer the biggest problem. As of now, there might only be one way to avoid an inevitable split.

All of this reportedly happened because of a few decisions made by Gutekunst, who took over as Green Bay’s general manager before the 2018 season. Drafting Love, not communicating with Rodgers about the selection and the unwillingness to commit after Rodgers won his third NFL MVP award has all led to this.

According to Yahoo Sports’ Charles Robinson, Rodgers is adamant that he won’t return to the Packers as long as Gutekunst is running football operations. If the Packers want to keep their franchise quarterback, the only hope of competing for a Super Bowl in the next two years, they reportedly need to fire Gutekunst.

There’s no precedent for this in the NFL. Tom Brady and the New England Patriots were in a bad spot a few years ago. After Bill Belichick drafted Jimmy Garoppolo, a rift formed between the coach and legendary quarterback. When things neared a boiling point, owner Robert Kraft stepped in and had Garoppolo traded to the San Francisco 49ers midway through the 2017 season.

Gutekunst doesn’t have a Super Bowl on his resume as general manager. While he is responsible for drafting cornerback Jaire Alexander, one of the best defensive players in the NFL, many of his other top picks from the 2018 draft class (Josh Jackson, Oren Burks, J’Mon Moore and Cole Madison) either became backups or are out of the NFL.

The 2020 draft class is the biggest potential stain on his resume. While Love didn’t have a full summer to learn the offense, he also didn’t make a strong impression in training camp and spent the entire season as the No. 3 quarterback. AJ Dillon, Green Bay’s second-round pick, seemed destined to be the featured back in 2021. But the Packers re-signed Aaron Jones, immediately making the Dillon pick look worse.

There’s no doubt Aaron Rodgers is far more valuable to the franchise than Gutekunst, a general manager is much easier to find than a Hall of Fame quarterback. But the Packers handle their business in a specific way and if it comes down to picking a side, Murphy will likely side with the general manager he hired.