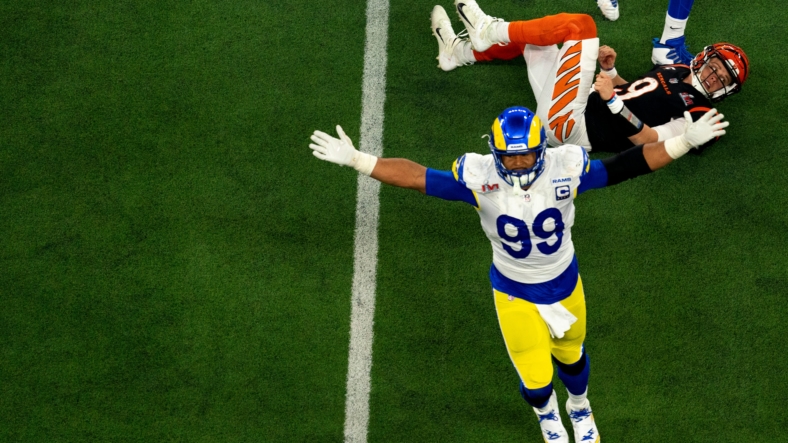 The new NFL season is set to begin on Thursday night, pitting the reigning champion Los Angeles Rams against a popular preseason pick to win a Lombardi in the Buffalo Bills.

Although it feels like just yesterday when news broke of Rams superstar defensive tackle Aaron Donald possibly considering retirement. While speculation had lingered for some time as the franchise continued its effort to reach the big dance, it wasn’t until Super Bowl Sunday when a bombshell emerged, suggesting Donald was prepared to walk away from the game if he could finally get that elusive championship ring on his finger.

Well, with a 23-20 victory over the Cincinnati Bengals, the three-time Defensive Player of the Year had finally gotten his wish, adding to an already Hall-of-Fame-worthy career. Yet, as we’ve seen too many times before, it wasn’t that easy for the 31-year-old Donald to quit the game he loves, as more speculation began to center around him returning for his ninth NFL season with the Rams. Then, the Super Bowl parade came, and Donald said, “Why not run it back?” leading us all to believe he’d return to the gridiron once again in the 2022-23 season.

Still, questions persisted. Donald, easily one of the game’s best current players, wasn’t being compensated as such. He wanted a new contract that recognized him as a truly special talent, as the highest-paid defensive player in football. Judging off his career thus far, who could blame him?

Donald finally got his extension in June, making him the highest-paid non-QB in NFL history, with a three-year, $95 million contract.

Aaron Donald was closer to retirement than we thought

While there are no longer any questions pointing to Donald hanging up his cleats, we’re left wondering, just how close did he come to filing his retirement papers? Thanks to Ian Rapoport, we now know Donald even went so far as sending a ‘retirement letter’ to the Rams after the season concluded, surely sending both general manager Les Snead and head coach Sean McVay into nervous wrecks in the process.

The letter was reportedly sent by Donald’s agent on May 9, just a month before he received his otherworldly contract extension. Could this have been another part of Donald and his agency’s ploy to ensure the game-wrecker got what he wanted in his next contract? It’s certainly possible.

According to the report, the Donald retirement letter also had instructions to forward the document to the NFL Commissioner’s office for Roger Goodell and his team to process. Though, according to Rapoport’s sources, the file was never forwarded.

Donald, his agent, and the Rams front office met the very next day to discuss their All-Pro DT’s contract, which led to several more meetings and negotiations before he ultimately signed on the dotted line to stick with the reigning Super Bowl champs.

While it sounds like their offseason included much more drama than expected, everyone’s happy again and Donald’s back in the starting lineup to face Josh Allen and Co. on Thursday night.