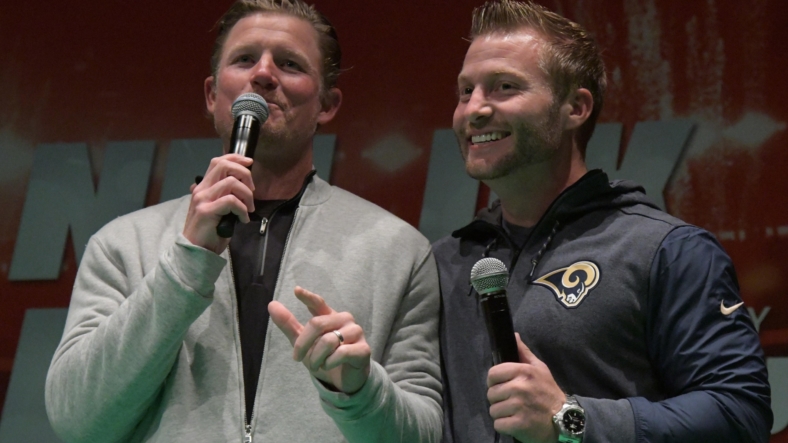 After winning Super Bowl LVI, the Los Angeles Rams aren’t looking to break up the band any time soon. With both their general manager, Les Snead, and head coach Sean McVay proving themselves at their respective positions over the past few seasons, all their hard work finally paid off back in February. Now, according to Ian Rapoport, both are being rewarded financially by their organization.

Both Snead and coach McVay have signed contract extensions through 2026, making them each among the highest paid in their positions in the NFL.

As usual in these announcements, neither Snead nor McVay’s specific financial terms have been revealed. Yet, some have speculated that McVay’s next contract could earn him upwards of $15 million per season. Part of this inflated rate may be directly tied to him flirting with the idea of joining the media fray instead of coaching. As we saw from Tom Brady‘s 10-year, $375 million contract with Fox Sports once the GOAT quarterback is ready to retire, there are big bucks to be made in the television world.

Yet, McVay also finally got a Super Bowl ring on his finger after hours and hours of dedication to his craft. He’s not ready to walk away any time soon. Especially with a roster led by Matthew Stafford, Cooper Kupp, Aaron Donald, and Jalen Ramsey. Now instead of trying to get the monkey off their back by winning one, it’s all about running it back, trying to win another, landing in Glendale, Arizona, for the kickoff of Super Bowl LVII in 2023.

It’s amazing to look back now at how the Rams even got this far. The Rams hired Snead in 2012 to be their GM. He quickly started shaking things up within the organization, beginning with a trade down with Washington to move out of position to land Robert Griffin III. While it seems crazy to think of now, Snead then traded for more draft picks, going from selection No. 2 down to No. 6, while scooping up two additional future first-round picks, one of them became Aaron Donald.

It was only four years later when Snead tried the opposite when he traded up from No. 15 all the way to No. 1 to select Jared Goff. While the roster was much stronger now, Goff experienced some early growing pains, leading to coach Jeff Fisher’s departure amidst a 4-12 season. After five consecutive seasons of missing the playoffs, Snead’s job security heading into 2017 was at an all-time low.

But then he did something unconventional, hiring a then-30-year-old Sean McVay, the youngest head coach in NFL history. McVay had just three seasons of offensive coordinating experience under Jay Gruden before landing with the Rams in their leadership role. Needless to say, Snead took a gamble, and it paid off in a monumental way.

Now, we see Snead taking an entirely different approach with his draft picks, running with the ‘F them picks’ mentality as he’s made trade after trade to swap future potential for immediate production by adding Pro Bowl talent to the roster at nearly every position group. This is all to say, there was a time when the Rams didn’t know what they had in Snead and McVay, but years later, everyone is proud of the progress they’ve made. Who can blame them? No one forgets who won the Super Bowl.