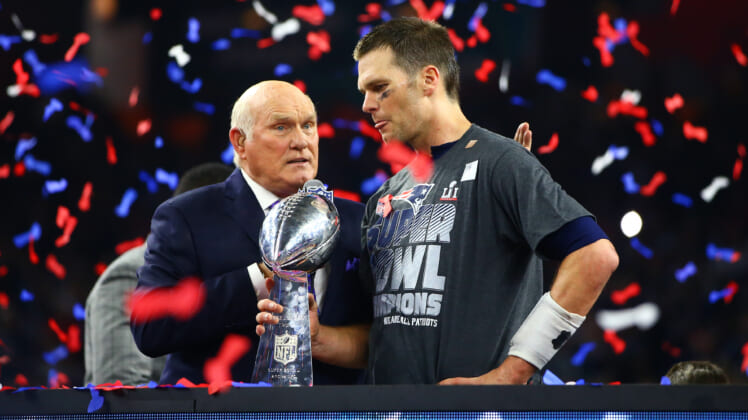 After 22 years in the business as an NFL quarterback, Tom Brady appeared ready to ride off into the sunset this past offseason. After 39 days of retirement, TB12 announced he was back for another year of glory.

Few details emerged of a post-playing career plan for Brady during his hiatus from the Tampa Bay Buccaneers. Sure, details of a movie were revealed, which Brady plans to produce and act in, but not much else as far as day-to-day activities have been known. Until now.

Despite Brady lacing them up for at least one more season, we now have a better idea of what Brady will be doing once he does decide to hang up the cleats.

According to FOX Sports, Brady is set to join their broadcasting crew as the lead football analyst during games once his playing career wraps up, whenever that may be.

Brady himself confirmed the news, by retweeting the announcement, while adding something of his own.

For FOX, this has to be considered a massive win, landing who many regard as the G.O.A.T.

Brady is coming away with a nice paycheck himself, as the QB is set to make somewhere between $37.5 million per season as their top analyst. This moves Brady way past what Troy Aikman makes at ESPN and also dwarfs Tony Romo’s CBS deal as well. Both figures are estimated to receive an annual salary of about $18 million.

We now have more details regarding Brady’s contract with FOX thanks to Andrew Marchand of the New York Post. According to Marchand, Brady has signed a 10-year contract worth $375 million. It is the largest contract in sports broadcasting history.

Now Brady is set to make more money in ten years with FOX than he made throughout his entire 22-year playing career.

We’ve seen other popular figures such as Tony Romo and the Manning brothers become extremely successful in their post-playing media careers, of course the Manningcast is a bit unique, but it’s still a valued addition. While Romo will be more of what we can expect from Brady, serving as the in-game analyst, along with a play-by-play partner.

Brady is likely to become a great broadcaster in that he rarely holds back his true feelings, yet also has a professional manner in which he knows when to stay quiet. Everything from his advanced knowledge of the game, his wit, sense of humor and of course the stories he can share, TB12 in the broadcast booth should be a riot.