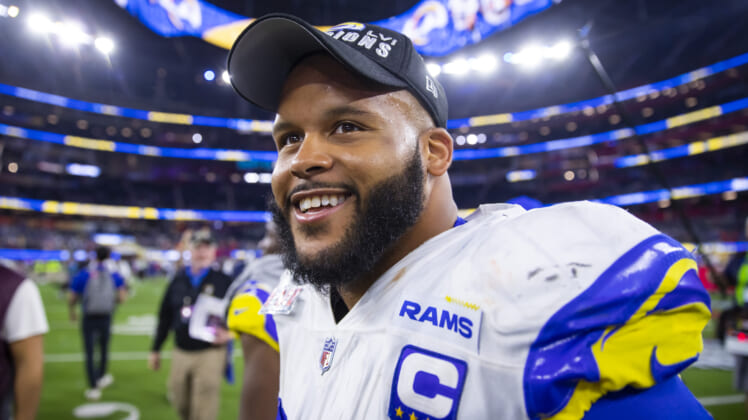 After helping lead his team to the Super Bowl title, star defensive tackle Aaron Donald had been considering retirement over the past several months.

For most, talk of the three-time NFL Defensive Player of the Year retiring was more about him wanting a rightful raise from the six-year, $135 million contract he had been playing under. It was a way for the 31-year-old Donald to create leverage with the Rams.

Well, it worked out. NFL Media’s Ian Rapoport reported on Monday that the Rams have re-worked Donald’s deal with a massive $40 million raise over the final three years of his current contract.

The deal pretty much results in a two-year, $60 million extension for Donald, making him the highest-paid non-quarterback in NFL history. The Rams themselves made it official later on Monday.

Prior to Donald inking this massive extension, T.J. Watt was the highest-paid non-quarterback in the league after the edge rusher inked a four-year, $112 million deal with his Pittsburgh Steelers.

Aaron Donald contract extension and what it means

Considered one of the best defensive players in modern NFL history, Donald has earned a Pro Bowl spot in all eight seasons he’s been in the NFL. He’s made the All-Pro team each of the past seven seasons. We’re talking about a dominating pass-rush force from the intrerior of the defensive line.

With Donald signing this massive extension, other defensive players are now in line to get paid big time. More than anything, that includes San Francisco 49ers edge rusher Nick Bosa. The two sides are working on an extension this offseason, which will now average out to well north of $30 million annually.