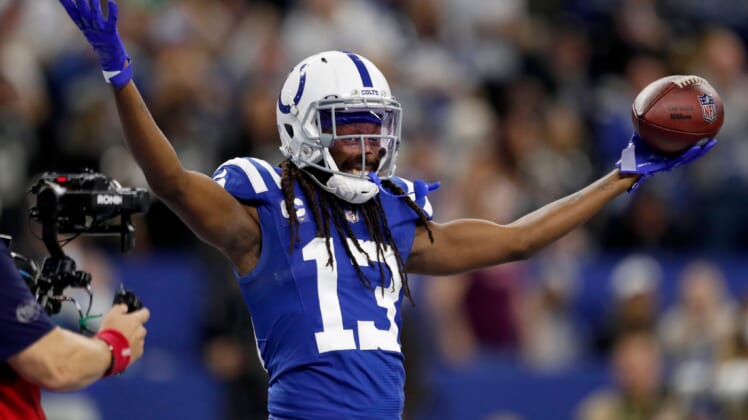 Despite entering the league as a third-round pick in the 2012 NFL Draft, T.Y. Hilton has racked up nearly 3,000 more receiving yards than any of his fellow receivers from his draft class. All 10 of his seasons have been with the Indianapolis Colts.

But Hilton’s contract expired at the conclusion of the 2021-22 season, rendering the four-time Pro Bowl receiver an unrestricted free agent. Now 32 years old, Hilton’s sat unsigned for over two months.

According to Stephen Holder of The Athletic, Hilton does plan on playing an 11th season, but it might not be with the Colts.

It’s true, he hasn’t put up a 1,000-yard season since 2018, his last year with Andrew Luck, but Hilton can still stretch the field for an NFL team in 2022. Hilton says he’s still talking with the Colts about playing another year in Indy, but there are also two other teams with interest in his services.

Without knowing who those other teams are, let’s speculate on the best possible landing spots for T.Y. Hilton this late in free agency.

The current head coach of the Philadelphia Eagles, Nick Sirianni, spent three seasons from 2018 to 2020 as the Colts’ offensive coordinator before dashing to Philly. Injuries impacted Hilton’s performance for each of the seasons, missing nine games over that timeframe, but he also averaged 94 targets in that span.

Sure, the Eagles have added to their WR corps in a major way each of the past three seasons, investing a first-round pick in one way or another to add talent, but Hilton is a free agent, meaning he’d cost the team very little.

Signing Hilton could make them more likely to trade Jalen Reagor, seeing if any team would be willing to offer a late-round selection for the disappointing draft pick.

Of course, the emergence of Quez Watkins could prevent the Eagles from wanting to add a veteran at the position, but all it takes is one injury for their depth to be tested once again. Hilton could help them pass that test.

Related: How a Jessie Bates trade to the Philadelphia Eagles might look

When Andrew Luck had his shoulder injury, it was Jacoby Brissett who immediately stepped in, starting 15 games for the Colts in his absence. Brissett then became the full-time starter two years later once Luck retired.

Needless to say, Hilton and Brissett developed a lot of chemistry over Brissett’s four years with the Colts. Sure, looking back, they were some of the least productive seasons Hilton experienced, but there could have been other factors that held him back.

Brissett is now on the Cleveland Browns, where Deshaun Watson‘s legal situation remains up in the air. No one knows what type of suspension he may be looking at. If it’s lengthy, it would only set Brissett up for another chance to be a starter, in which Hilton may be more intrigued to join the Dawg Pound.

With both Odell Beckham Jr. and Jarvis Landry out of town, the Browns definitely have a need at the position, as Amari Cooper, rookie David Bell, and Donovan Peoples-Jones don’t exactly incite fear. Hilton won’t either, but he can help be a complementary piece in the scheme.

The last team on our list is the Houston Texans due to a variety of reasons.

With Brandin Cooks atop the depth chart and few other NFL caliber receivers behind him, there’s plenty of space for a new receiver to emerge.

They have 2021 third-round pick Nico Collins who figures to assume a starting role and incoming second-round rookie John Metchie has a lot of potential as well, but the latter is coming off an ACL tear in December.

Metchie may not be 100% right away despite a belief that he’ll be ready to go by July. Adding Hilton would give the Texans more time for Metchie to return to health while bringing in an All-Pro who can help show the younger receivers a few tricks along the way.

Hilton would also be reuniting with Pep Hamilton, who was his offensive coordinator from 2013 to 2015. The vibes from Hamilton must have been strong, with Hilton seeing 90 targets, racking up 861 receiving yards with seven touchdowns, even as a third-round rookie.

Chances are, Hamilton and Hilton have stayed pretty close over the years, and now that the former is the OC for the Texans, a reunion could be in the works.

Of course, if none of these teams are the perfect fit for Hilton, he could always go back to the Colts and see what life is like with Matt Ryan under center instead of Carson Wentz. Whatever he decides, it appears as though Hilton can find success in a number of different atmospheres. Let’s see what happens.