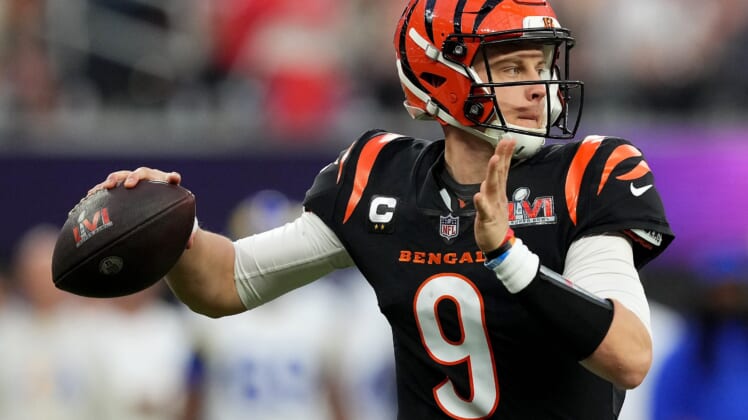 Cincinnati Bengals quarterback Joe Burrow has a great deal of respect for his AFC North counterpart Baker Mayfield. However, he admits the Cleveland Browns could not pass up the opportunity to acquire Deshaun Watson despite having a good QB in-house.

In just two seasons in Cincinnati Burrow has quickly proven the promise of being the first overall pick in the 2020 NFL draft. After a growing pains first season where the team went 2-7-1 in his starts, the Bengals roared back in year two and shocked the league by making it all the way to Super Bowl LVI.

During those first two seasons, the 25-year-old gained a lot of respect for the man taken first overall two years before him, Baker Mayfield. As another team in the division, Burrow has seen Mayfield and the Cleveland up close four times thus far. During a Wednesday guest spot on “The Full Send Podcast” Burrow was asked about the awkward situation of Cleveland acquiring Deshaun Watson despite having Mayfield on the team. While he says it is a bad position for Mayfield, he couldn’t help but praise his talents.

Related: Get the full rundown of the 2022 Cincinnati Bengals schedule

Joe Burrow says Baker Mayfield ‘will land on his feet’

“That’s a tough situation. You know, he was hurt all last year,” Burrow said. “I mean, every time we play him he balls. First time we played him — Thursday night — Week 2 of my rookie year, we lost like 30-34 or something. He balled. Then the next time we play them I throw for 400 yards, and he goes 25-of-28, with five touchdowns. Goes on a two-minute drive, touchdown won the game. I haven’t beat the Browns yet. He beat us both times this year.”

While he has nothing but respect for the Oklahoma University alum and one-time Heisman Trophy winner, when it comes to the Browns trading for Watson, Burrow admits that it was a move Cleveland could not pass on because of how gifted the former Houston Texans signal-caller is. Essentially, it was an opportunity they had to take because they went from having a good QB to a great one.

“I think when you have a guy like Deshaun you’ve gotta take a chance at that. He’s such a great player but Baker will land on his feet. He’s a really good player,” Burrow said.

Mayfield is still currently on the Browns roster and despite his desire to be traded, there hasn’t been much traction yet to any rumors of a possible deal any time soon. However, many NFL experts expect the team to either trade or release Mayfield before July 1.