How a Jessie Bates trade to the Philadelphia Eagles might look 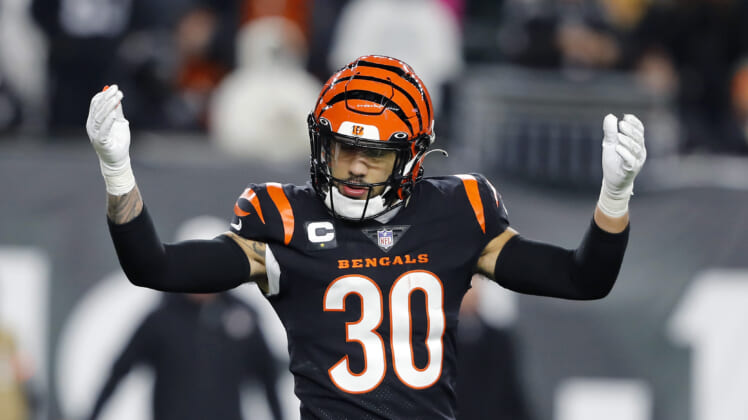 Following their surprise Super Bowl LVI appearance, one of the top defenders and team captain Jessie Bates was hit with the franchise tag by the Cincinnati Bengals.

This allowed the organization to keep Bates around for at least another season, provided he signs the tag.

From his perspective, Bates doesn’t want to play on a one-year deal, preferring to lock down long-term financial security instead.

It’s gotten to the point where Bates refuses to attend Bengals’ offseason training activities with him not being willing to play on the tag.

Meanwhile, the Bengals added to the depth chart by drafting Daxton Hill with their first-round pick in April.

Could the slow negotiation process, combined with Bates’ intention not to play on his current contract eventually lead to a trade? You betcha.

There’s even reason to believe Bates has one specific team already picked out.

We’re in the age of trying to interpret what every little reaction on social media means in the grand scheme of things.

The latest reason to sleuth is due to Jessie Bates liking a post on Twitter. Credit to a couple of social media observers for pointing it out.

Related: Paul Brown Stadium, home of the Cincinnati Bengals said to need $493 million in upgrades in next 20 years

As noted, Bates’ latest activity might not mean anything. But just in case it does, here are a couple of different trade scenarios in which the Eagles land Bates via trade.

General manager Howie Roseman has been aggressive in adding multiple impact pieces to the Eagles’ roster this offseason, who’s to say he’s anywhere close to being done?

Adding Bates brings another intimidating presence to Philly and his resume with the Bengals should have any team linked to the 6-foot-1 safety feeling excited.

The Eagles could certainly use a better starting safety, and Bates could step in as a strong sidekick to Darius Slay, leading the way in the secondary.

In this first scenario, the Eagles add talent to their roster without taking anything away from their current team. Already possessing an extra first-round pick from the New Orleans Saints in 2023, the Eagles have plenty of spare picks, but trading a top selection (first-round) for a non-Pro Bowl safety is a no-no.

The Bengals may say no, based on the fact that they’re looking to get back to the Super Bowl and hopefully win the dang thing.

Here’s another scenario that could work better for both teams.

It may not feature a ton of trade value, but should Joe Burrow go down with another injury this season, do we really want Brandon Allen taking over for an extended stretch? Probably not.

Minshew is a more-than-capable backup who can hold it down and likely win a few games thanks to an extremely strong cast of skill position players. He might be more expendable once the Eagles get a better look at UDFA Carson Strong, but early indications have been very positive.

Marcus Epps is the current favorite to start at safety for the Eagles, but if Bates is brought on board, he’s expendable, giving the Bengals more depth at both corner and safety.

The third-round pick is the top asset here, giving the Bengals a chance to add more depth in the 2023 NFL Draft.

It may not be the blockbuster package Bengals fans are hoping for, but the reality is safeties just aren’t viewed as a premier position in the NFL. When starting a team from scratch, no one says “Let’s get a safety first”.

Bates is one of the best at his position and is a team captain with the Bengals, but there’s a reason they’re also hesitant to pay him top dollar, even if it’s not obvious to the public eye. Despite not having a Pro Bowl nod in his four-year career, part of that could be due to being overlooked playing on a mostly bad Bengals team his first few years.

At the end of the day, Bates is an impact player who can help turn around a defense in a variety of ways.

Now at the age of 25, some lucky team could add the hard-hitting, versatile Bates to the back end of the defense, and it just might be the Eagles.