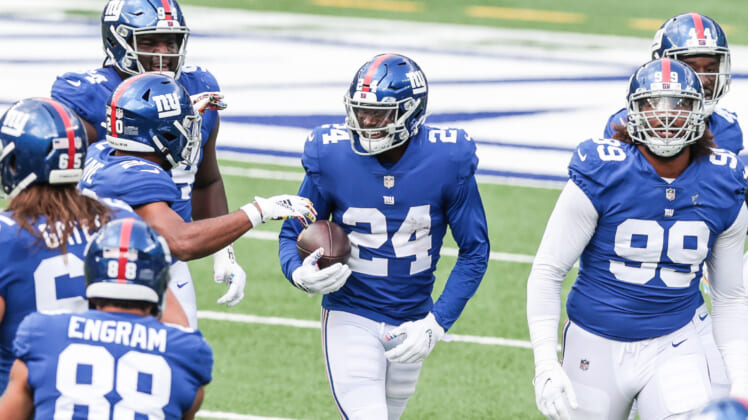 Former New York Giants cornerback James Bradberry will be staying in the NFC East after signing a one-year deal on Tuesday with the Philadelphia Eagles.

After a couple of months of trying to trade Bradberry to land both a solid return and some cap space, the Giants ended up releasing the one-time Pro Bowler last week. While the Las Vegas Raiders were listed as one possible destination in free agency, and teams like the Kansas City Chiefs were reportedly interested in trading for him last month, the cornerback will not be heading out west.

Instead, he will stay in the northeast and join Giants’ division rivals the Philadelphia Eagles. On Tuesday, NFL Network insider Ian Rapoport broke the news that Bradberry had come to terms on a one-year contract that will net him as much as $10 million in 2022. Soon after the deal was announced, ESPN NFL insider Adam Schefter revealed the $7.25 million of the contract is guaranteed and the rest of the $10 million would come in incentives.

Related: Find out what are the 10 must-see games on the 2022 NFL schedule

The 2020 Pro Bowler will now be paired up with 2021 Pro Bowler Darius Slay to form the best cornerback combo in the division.

Bradberry spent two seasons in New York after a four-year stint with the Carolina Panthers, after the organization took him with their second-round pick (62nd overall) in the 2016 draft. Last season, Bradberry had the lowest solo and combined tackle totals of his career despite starting in 16 games. However, he did notch the best single-season number of interceptions of his six years in the NFL with four.

The New York Giants entered the offseason over the salary cap and needed to make some major moves to try and avoid incurring notable cap penalties this season. In trying to get a return for Bradberry, the organization missed the deadline to get the most optimal amount of money back in 2022. However, in releasing James Bradberry earlier this month, they did save $10.2 million.