The NFL’s All-Pro selections were revealed on Friday and as usual, they’re generating plenty of chatter. Whether it’s getting riled up about first-team snubs or a player missing the list altogether, the selections always help paint a picture of how the national media views players and their performances over the course of the year.

They also help provide some insight as to how the voters may approach their MVP votes. Here are a few reactions to the All-Pro announcements.

Perhaps the best indication yet that Aaron Rodgers will win his fourth MVP award is that he was named as the first-team quarterback. AR12 was also a first-team All-Pro selection in each of his previous MVP years.

Some might suggest other players should win, but the All-Pro votes from the national media suggest otherwise. There’s a good chance the MVP odds will hold true.

While there are several quarterbacks who could be seen as deserving for an All-Pro selection based on their 2021-22 performances, it’s hard to argue any two were better than Rodgers or Brady. Maybe next year. 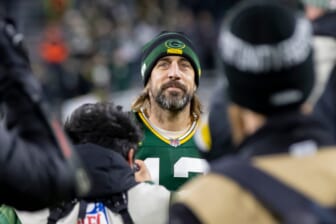 Joining Donald were four other players, including one of his teammates on the Rams.

While some may feel Rodgers should have been a unanimous All-Pro selection, clearly there were some voters who felt otherwise. But we already knew that.

Making the All-Pro team as a rookie is an impressive feat. Not only does it show they were the right pick, it shows they’re already being considered the best among their peers. This season, there were three rookies to make an All-Pro team and a couple more who received strong consideration.

Center Creed Humphrey of the Kansas City Chiefs missed the cut by just one vote to Corey Linsley of the Los Angeles Chargers. Kick returner Kene Nwangwu also missed a second-team selection in his first season with the Minnesota Vikings.

Like every year there are several players who some fanbases might say got snubbed in the All-Pro selections.

One interesting decision based on positional determination is the case of Deebo Samuel beating out Justin Jefferson for a first-team selection. The tough part for Jefferson is he only missed by one vote, with Samuel getting 21 to Jefferson’s 20. Ja’Marr Chase received nine votes and made the second team.

As great as Jefferson was in his second season, tallying 1,616 receiving yards and 10 touchdowns, the players are hard to compare, as Samuel scored eight rushing touchdowns this season in addition to six touchdown catches. But it just shows the added versatility that voters factored in when making their selections. The two other first-team selections were Davante Adams and Cooper Kupp and deservedly so.

Another possible snub to some is Nick Bosa not making the All-Pro second team despite leading the league in tackles for loss while racking up 15.5 sacks, ranking fourth in the NFL. He was one vote shy of beating out Maxx Crosby. The two first-team selections were T.J. Watt and Myles Garrett, respectively.

There are undoubtedly several more players who fanbases will argue got snubbed over the next few weeks, but those are a few who stick out so far.