Winners, losers from Buccaneers’ comeback victory over the Chargers 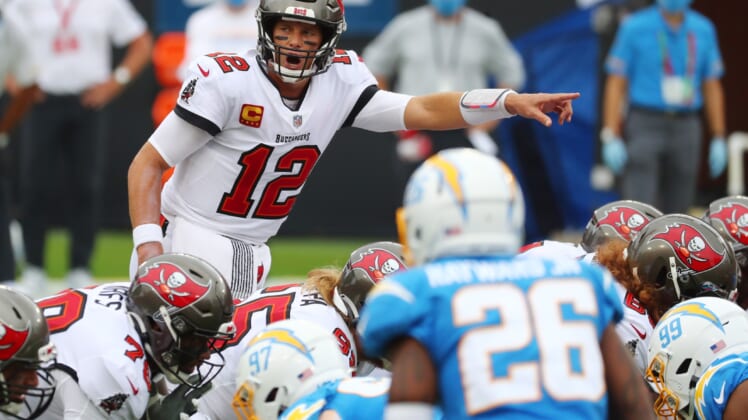 The Tampa Bay Buccaneers welcomed the Los Angeles Chargers in Week 4 in a potential AFC playoff preview. If Sunday’s game was a sign of things to come, it might be time to start talking about the Buccaneers as a Super Bowl contender once again.

Things looked bleak for Tom Brady and Co. late in the second quarter. Trailing 24-7 with the greatest quarterback in NFL history playing like normal 43-year-old quarterbacks, the Buccaneers found themselves in a massive hole. Suddenly, everything changed in the second half.

The Chargers are living through Groundhog Day. Even with rookie quarterback Justin Herbert, Los Angeles shows it has the talent to compete with anyone in the AFC. Time and time again, when it’s crunch time, the Chargers collapse in grand fashion. Unsurprisingly, it led to another crushing finish for this team.

Here are the winners and losers from the Buccaneers’ incredible 38-31 victory over the Chargers.

Brady had a reservation for a “loser” spot after his first-half performance. He completed just 15-of-29 attempts for 106 yards, throwing a horrendous pick-six. It looked like Father Time caught up to him, with Brady lacking the velocity on his throws to fully execute this offense. Everything changed after halftime.

Quite simply, we saw the Hall of Fame quarterback we’ve grown accustomed to in the last two decades. Against one of the NFL’s best defenses, Brady threw for over 250 yards with three touchdowns in the final two quarters. When Tampa Bay’s defense gave up big plays, he would answer with his own go-ahead scores. A five-touchdown performance and a dominant second half, this is the Buccaneers’ offense we expected before the season.

Hayward has been one of the best cornerbacks in the NFL since signing with the Chargers. A two-time All-Pro selection, a matchup against Mike Evans was the dream matchup for football fans. Instead of seeing two great players exchange blows on every snap, it was a one-sided destruction.

Evans, playing on an injured ankle, took Hayward to school. Tampa Bay’s No. 1 wide receiver erupted for 122 yards, making some incredible catches in the air. On a day when the Buccaneers were without Chris Godwin and later lost O.J. Howard, Hayward had one job on Sunday. If he did it, the Chargers win. Instead, it’s a familiar and painful loss.

Bruce Arians raved about Jones’ talents this summer, fueling a belief that the former No. 38 overall pick would deliver a breakout season. Suddenly, that all excitement disappeared once the Bucs signed Leonard Fournette. In Week 4, with Fournette sidelined, we saw exactly why Jones could be Tampa Bay’s featured running back.

The Buccaneers made him the focal point early in the game, feeding him the football as often as possible. He racked up 79 total yards in the first half alone, while averaging 7.4 yards per carry. Based on how Jones looked against the Chargers, Tampa Bay should take its time with Fournette’s injury recovery. Even when he returns, Jones deserves a bigger workload.

Loser: Jordan Whitehead is the glaring problem in Buccaneers’ defense

Talk about a day to forget. Fans have been frustrated over Whitehead’s play this season, especially his Week 1 performance against the New Orleans Saints. Frankly, that Week 1 outing looks acceptable compared to what we saw in Week 4. Whitehead was atrocious in coverage, giving up big plays like the Chargers’ offense was on his fantasy team.

Even when sent on the blitz, he whiffed on a sack. Oh, he also committed a costly personal foul. We love Tampa Bay’s defense, but it could stand to benefit by replacing Whitehead. If they find an upgrade in free agency or via trade, this team can compete for a Super Bowl.

Winner: Justin Herbert is a star in the making

It took a freak accident for Herbert to get his shot. While Anthony Lynn might have promised Tyrod Taylor would start once he’s healthy, that’s not happening. We knew Herbert was the Chargers’ future, but it’s evident he is their present and might just be a future star.

The 22-year-old was incredible in his NFL debut against Kansas City Chiefs, nearly matching Patrick Mahomes’ every throw. Facing a future Hall of Famer in Week 4, the rookie looked even better than Tom Brady at times. Hebert’s first touchdown showed his touch on deep passes, but it was just the start of this great performance. He unleashed a perfect back-shoulder throw for a score and evaded pressure like a magician. He just needs to eliminate the one big mistake he makes every start, but there’s no denying his bright future.