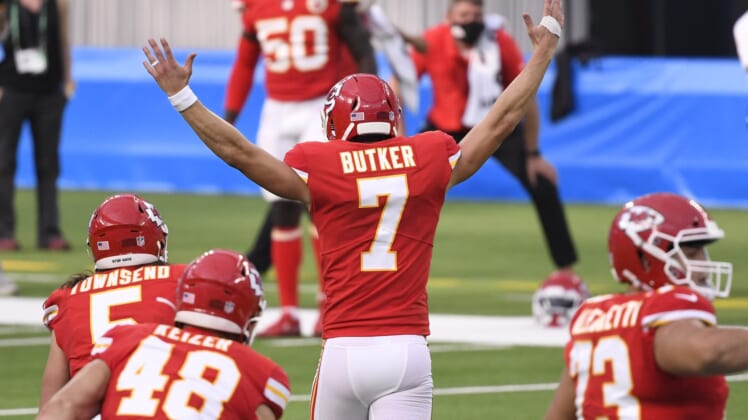 Before the Los Angeles Chargers took the field in Week 2 against the Kansas City Chiefs, everyone in the NFL was expecting Patrick Mahomes and Co. to leave Tyrod Taylor and the Chargers’ offense in the dust. Instead, this divisional clash provided quite a few surprises and a thrilling finish in overtime.

After Taylor suffered a chest injury before the game, the Chargers were forced to turn to rookie Justin Herbert. Facing the defending Super Bowl champions on a big stage with little preparation, most rookies would crumble under the pressure. Herbert, the No. 6 pick in the 2020 NFL Draft, shined.

With Herbert dazzling, the pressure was on Mahomes to deliver another MVP-like performance. Facing one of the NFL’s best defenses, he had one of the worst first-half performances in his young career. After two ugly quarters, Mahomes recovered and put the Chiefs on his back for a thrilling comeback to send it to overtime.

The Chargers were given the first shot to win it in overtime and wasted it. Kansas City got the football back and the rest is history. Here are the winners and losers from the Chiefs’ 23-20 victory over the Chargers in Week 2.

We’re not just talking about a rookie quarterback making his debut. As the backup quarterback, Herbert didn’t get any first-team reps in practice this week. The 22-year-old spent six days preparing Taylor to face the Chiefs’ defense. On Sunday, the Chargers were suddenly forced to start him. That’s what makes this such an unbelievable NFL debut in Week 2.

Some of the throws he made, like this jaw-dropping bullet deep over the middle, are absurd. Oh, he also showed nice athleticism and practically ran over linebackers. Herbert went head-to-head with the best player in the NFL and often looked better than him. He did all of this without any preseason action, a limited training camp and no practice reps this week. This should go down as one of the most impressive debuts in NFL history.

When Laurent Duvernay-Tardif opted out of the 2020 season, the Chiefs knew it would be a hit for their offensive line. It wasn’t much of a problem in Week 1 against Houston’s front seven. In Week 2, against a great pass rush, it was evident that this offensive line will run into some issues this season.

While the Chargers only finished with one sack, they pressured Mahomes and knocked him around early. It clearly had an effect, with the NFL MVP and Super Bowl LIV MVP never looking quite right in the first half. Kansas City’s issue at the line of scrimmage also impacted running back Clyde Edwards-Helaire, mustering only 38 rushing yards on 10 carries. Lastly, we can’t forget the backbreaking penalties on the final drives. This a problem worth monitoring heading into a Week 3 battle with the Baltimore Ravens.

Few things are better for a rookie quarterback than a great running game. While we’ve seen plenty of teams invest first-round picks on running backs, the Chargers prove talent can be found elsewhere. In this case, a fourth-round pick and a former undrafted free agent.

Austin Ekeler and Joshua Kelley dominated the Chiefs. Whether it was runs up the middle or using them both out of the backfield, the Chargers found ways to feed them the football. Ekeler racked up 93 rushing yards and 55 receiving yards, regularly picking up huge gains. Kelley, in only his second game, finished with 113 scrimmage yards on 25 touches. This team knows its recipe for success and it could lead them to the playoffs.

The Chargers won the coin toss in overtime, allowing them to keep Mahomes off the field. When you’re provided that chance by the football gods, you’ve got to take advantage of it. Instead, head coach Anthony Lynn basically waived the white flag and put a bow on the Chiefs’ victory in Week 2.

Herbert completed a six-yard pass to Mike Williams, setting up a fourth-and-1 at the Chargers’ 34-yard line. Los Angeles dominated this game in the trenches with 183 rushing yards heading into this very moment. Instead of trusting his running backs, Lynn punted the football back to Mahomes. The moment he made that decision, the game was over.

It’s rare for a kicker to be considered a game-changing player, but Butker keeps proving why he is just different than his peers. We would have been impressed if he just drilled a game-winning, 53-yard field goal for a divisional win. But, thanks to a false start and a timeout, we saw something even more incredible.

He drilled three consecutive field goals from 50-plus yards away, with the last finally counting. Very few kickers are even trusted to attempt a kick from 55-plus yards out, but Andy Reid knows Butker’s leg is special and thrives in clutch moments. The box score will show three converted field goals on Sunday, but fans who watched know we saw something even more special.