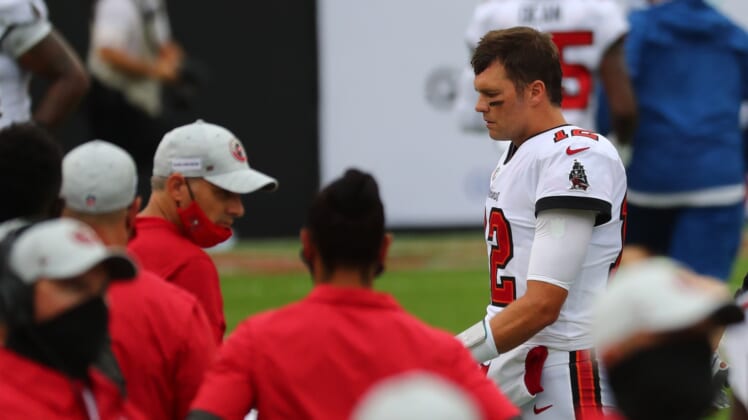 It was back in Week 1 that new Tampa Bay Buccaneers quarterback Tom Brady drew the ire of head coach Bruce Arians after throwing a pick-six in his debut with the team.

The six-time Super Bowl champion has been turnover prone in recent starts, leading to questions about whether he’s regressed at the advanced age of 43.

That came out in droves during the first half of Tampa Bay’s game against the Los Angeles Chargers on Sunday. With the Buccaneers driving in a tie game, Brady tossed an interception into the hands of Chargers cornerback Michael Davis. He returned it 78 yards for the go-ahead touchdown.

Brady didn’t even look off his intended receiver before throwing the ball late and to the outside. It’s a rookie mistake. Adding injury to insult (almost literally), Buccaneers star wide receiver Mike Evans had to depart the game with a lower-body issue.

Tampa Bay has won two consecutive games after a season-opening loss to the New Orleans Saints. However, that’s had more to do with the team’s defense than what we’ve seen from Brady and Co. on the other side of the ball. Brady has now thrown seven touchdowns compared to four interceptions on the season.